Do you know the way to Kiribati? Its head of state was here to study ‘Yolanda’ | Global News
Close
menu
search

Do you know the way to Kiribati? Its head of state was here to study ‘Yolanda’ 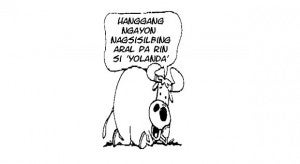 MANILA, Philippines—A foreign head of state flew in for a personal visit last week and was surprised to get an official security detail.

Anote Tong, president of Kiribati (pronounced ki-ri-bas), slipped into the country late Friday night for a four-day visit to study the impact of Super Typhoon Yolanda (international name: Haiyan) on Eastern Visayas, a priority concern for the environment advocate wary about the future of his sinking 800-square-kilometer island nation.

“It wasn’t an official visit. He wanted to study, interview people in areas affected by Yolanda. It was a serious preparation for a disaster of this magnitude,” said Navotas Rep. Toby Tiangco, who helped arrange Tong’s visit to the country.

Tiangco said Tong, internationally recognized for his advocacy on climate change, had wanted to fly to Eastern Visayas to see the devastation.

The Kiribati president is apparently “worried” that his country and its population of over 103,000 people scattered on atolls and islands in the Pacific Ocean just beside the International Date Line may not survive a storm that packed Yolanda’s strength.

With gusts of up to 270 kph, Yolanda and its storm surge of 5 to 7 meters killed more than 6,000 people and destroyed more than a million homes.

“The president of Kiribati is … very much worried about climate change. There was a study that it would be erased from the map in 50 years,” said Tiangco of the island nation in the Pacific, which is only up to two meters above sea level at its highest point.

“They have no shield. It’s flat land. If a typhoon like Yolanda hits the island, they will be wiped out,” said the lawmaker.

Tiangco invited Tong to the Philippines upon learning from his friend, Philippine Ambassador to Papua New Guinea Bienvenido Tejano, that Tong had been meaning to visit.

“I didn’t know him (Tong) directly. When Ambassador Tejano told me he wanted to come, I wrote him a letter [as an invitation],” Tiangco said.

“He actually wanted to come here right after, around December,” he said.

Tong and his party of four others—one secretary to the Cabinet, his personal assistant, his aide-de-camp and a secretary to the Ministry of Fisheries and Aquatic Resources—flew in via a commercial flight on Friday night, unaware that the Philippine side somehow prepared a little welcome, albeit sans the red carpet.

“Of course I informed the DFA (Department of Foreign Affairs). So they provided him with a protocol officer and PSG (agents of the Presidential Security Group). He was even surprised that he was given a security [detail],” said Tiangco.

Official visits of heads of state are usually marked with arrival honors at the airport.

The Kiribati president then took an early morning flight to Tacloban City, among the hardest-hit areas, on Saturday.

While there, he checked on the impact of the typhoon and talked to locals. He spent the night in Tacloban before flying to Samar, a bit delayed as his chopper ride had to be replaced.

“It was tough what he went through. When he was flying back from Tacloban to Manila on Sunday, all flights were canceled. But he had to return here so I think he had to take a military plane,” Tiangco said.

Tong said the devastation left behind by Yolanda, especially in Tacloban and Samar, should be a wake-up call in the fight against climate change.

“We have talked about climate change now and for the last 10 years. But what happened to your country some months ago is the strongest statement to tell the world that we should take seriously concerns about climate change,” the Kiribati president said.

Before leaving for an engagement in New York on Tuesday, Tong dropped by the headquarters of Frabelle Foods Inc.’s fishing division in Navotas, where the company’s fishing ships return and where their catch is sold to fish mongers or sent to a plant to be turned into products, such as fish and squid balls.

He also visited a shipyard in Cinco, Navotas, where the nation has commissioned the construction of at least two barges.

The mayor, who spoke after the presentation, emphasized the similarities between Navotas and Kiribati, whose residents are both dependent on the sea for their living.

Both Kiribati and Navotas have disaster management plans, but have to continue to prepare for worsening natural calamities, the mayor said.

He also suggested a dynamic exchange and sharing of best practices in climate change adaptation for the benefit of the residents of the two areas.

Tong welcomed the idea and hoped for more interaction not just with the city of Navotas, but also with the national government.

“We share a great deal in common. There are things, issues and lessons here where we can learn from. I believe we will be able to work out something. I have no doubt that we will see some sense of collaboration with our countries,” the Kiribati president said.

“I will go back to the country with very real possibilities of collaboration in certain areas,” he said at the reception for him at the Navotas City Hall on Tuesday afternoon.

There are about 20 Filipinos known to be working as professionals in Kiribati, according to the DFA.

‘Time running out’ for Kiribati as seas rise, says president

Complacency in the era of climate emergency