Filipinos, other Asians top success index in US 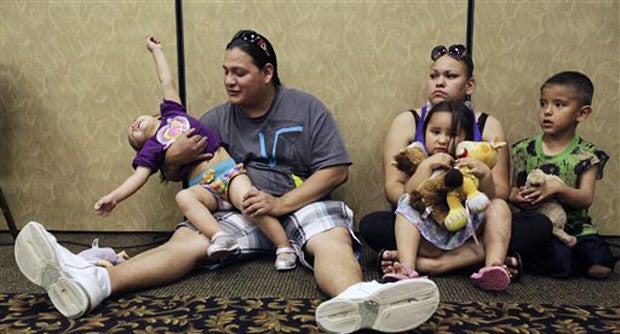 Elijah Bearsheart, left, holds his daughter, Keanala, 1, as he sits with his family, Kehala Diserly, Kiari Diserly, 3, and Yamni Pederson, 5, as they listen to testimony during the Indian Child Welfare Act summit in Rapid City, South Dakota. AP FILE PHOTO

NEW YORK—In every region of America, white and Asian children—including Filipino-Americans—are far better positioned for success than black, Latino and American Indian children, according to a new report appealing for urgent action to bridge this racial gap.

Titled “Race for Results,” the report is being released Tuesday by the Annie E. Casey Foundation, which for decades has worked to improve child well-being in the United States.

The foundation also produces annual “Kids Count” reports, with reams of state-specific data, but these generally have not focused on race. The new report tackles the topic head-on, with charts and ratings that convey dramatic racial discrepancies.

At the core of the report is a newly devised index based on 12 indicators measuring a child’s success from birth to adulthood. The indicators include reading and math proficiency, high school graduation data, teen birthrates, employment prospects, family income and education levels, and neighborhood poverty levels.

Using a single composite score with a scale of one to 1,000, Asian children have the highest index score at 776, followed by white children at 704.

“Scores for Latino (404), American-Indian (387) and African-American (345) children are distressingly lower, and this pattern holds true in nearly every state,” said the report.

Patrick McCarthy, the Casey Foundation’s president, said the findings are “a call to action that requires serious and sustained attention from the private, nonprofit, philanthropic and government sectors to create equitable opportunities for children of color.”

The report was based on data from 2012, including census figures tallying the number of US children under 18 at 39 million whites, 17.6 million Latinos, 10.2 million blacks, 3.4 million of Asian descent, and 640,000 American Indians, as well as about 2.8 million children of two or more races. Under census definitions, Latinos can be of various racial groups.

The report described the challenges facing African-American children as “a national crisis.”

The state with the highest score for Latino children was Alaska, at 573. The lowest was Alabama, at 331.

The score for Indian children in South Dakota — 185 — was the lowest of any group in any state on the index.

Some of South Dakota’s Indian reservations are among the poorest nationwide, which contributes to high levels of domestic violence, alcoholism and drug abuse, fetal-alcohol syndrome, teen pregnancy and low graduation rates.

Among its recommendations, the report urged concerted efforts to collect and analyze race-specific data on child well-being that could be used to develop programs capable of bridging the racial gap. It said special emphasis should be placed on expanding job opportunities as children in the disadvantaged groups enter adulthood.

“Regardless of our own racial background or socio-economic position, we are inextricably interconnected as a society,” the report concluded. “We must view all children in America as our own — and as key contributors to our nation’s future.”