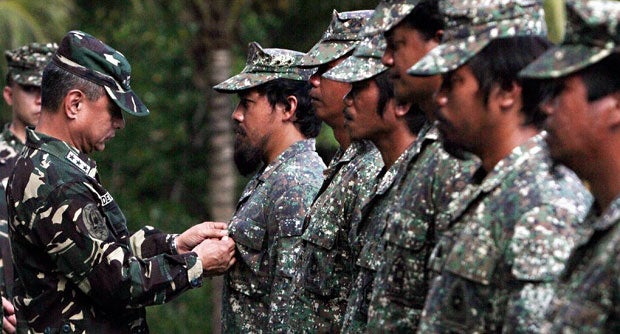 MANILA, Philippines — After a five-month stay at the marooned BRP Sierra Madre to guard the Ayungin Shoal (Second Thomas Shoal), members of the Philippine Marines who were relieved from their posts were welcomed on Monday at the Naval Forces West in Ulugan Bay in Palawan.

The nine Marines were led by Marine First Lieutenant Mike Pelotera. On Saturday, a Philippine ship managed to slip past a Chinese blockade and bring supplies and fresh troops.

On March 9, China blocked an attempt of a Philippine ship to resupply. It was reported that last Saturday’s mission was the latest and successful trip.

The Marines were awarded with Bronze Cross Medals. This award recognizes “heroism” of soldiers who risk their lives but are not directly involved in actual armed conflict.

The Philippines was able to outwit the Chinese blockade, a day after the Philippine government filed a 4,000-page memorandum on its claims over the West Philippine Sea (South China Sea) before the international court.

The resource-rich Ayungin Shoal that is part of the West Philippine Sea is also claimed by China.  It is located 105 nautical miles from Rizal in Palawan and is well within the Philippines’ exclusive economic zone.

The Filipino presence in Ayungin is maintained through BRP Sierra Madre, a ship that was purposely ran aground in 1999.