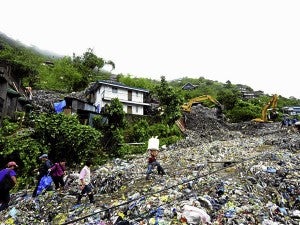 MANILA, Philippines—An online petition urges Canada to hasten the “re-exporation” of  some 50 container vans of toxic garbage smuggled into the country last February.

“Canada pick up your garbage! Philippines is not your trash can, ” the petition initiated by environmental and civil society groups  read.
“The 50 container vans, until now, are left in the vicinity of the Bureau of Customs (BOC). The garbage juice are now leaking and pose extreme health hazards and irreversible environmental problems in the country,” it  said.

The campaign initiated by Anna Marie Kapunan, which is posted in the website change.org, urged netizens to sign the petition to urge the Canadian Embassy in Manila to act on the issue.

The petition was supported by the Ecowaste Coalition, Greenpeace, Ateneo School of Government, Green Convergence among others.

In February, the BOC intercepted a shipment of 50 container vans of garbage from Canada at the Port Manila.

The BOC has declared this as an unlawful importation citing Republic 6969 or Toxic Substances And Hazardous and Nuclear Waste Control Act of 1990.

The agency has already filed a case before the Department of Justice against the shipper, Chronic Incorporation.