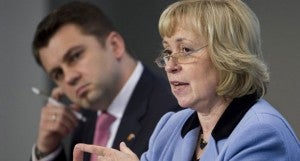 MANILA, Philippines—German Minister of State Maria Böhmer called on Foreign Secretary Albert del Rosario on Thursday and both discussed bilateral political and economic issues ahead of the 60th anniversary later this year of the establishment of diplomatic relations between Germany and the Philippines.

Böhmer, who is on a visit from March 26 to 28, was one of the foreign dignitaries invited to the signing of the Comprehensive Agreement on the Bangsamoro at Malacañang Thursday.

The Department of Foreign Affairs said this was Böhmer’s first trip to the Philippines, the third country she has visited since assuming her post in December.

Del Rosario and Böhmer “noted with satisfaction” the burgeoning bilateral political and economic relations between their two countries, the DFA said.

Germany is the Philippines’ eighth top trading partner and the top in Europe with $4.5 billion (about P203 billion) in total trade in 2013.

The two officials reaffirmed their commitment to bilateral engagement and cooperation not only in the political field but also in areas such as labor, people-to-people exchanges, investments and the maritime sector.

Germany controls more than 40 percent of the world’s container shipping market, over 50 percent of which is manned by Filipino seamen. The country has been supportive of the Philippines’ efforts to comply with the Standards of Training, Certification and Watchkeeping Convention.

On labor cooperation, both sides agreed to promote the smooth implementation of the Agreement on the Deployment of Philippine Healthcare Professionals.

On the West Philippine Sea issue, the DFA said Böhmer echoed the statements made by Foreign Minister Guido Westerwelle on his visit to the Philippines in February 2013, reiterating Germany’s support for a rules-based approach to the disputes and underscoring the importance of a peaceful resolution.

Diplomatic relations between the Philippines and Germany were formally established on Oct. 8, 1954.