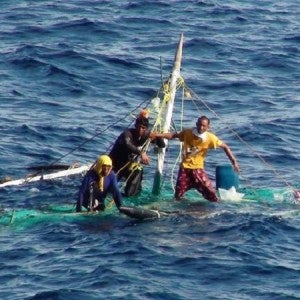 TAWI-TAWI, Philippines – In graduation ceremonies here, parents among the Sama tribe of Sitangkai and Sibutu islands worry about being able to send their children to college because fishing, their principal means of livelihood, has been adversely affected by the Sabah standoff, which ended in March 2013.

Alexander Bonajal, vice-president of a local cooperative, said Malaysian authorities have been preventing locals from fishing in Tanjung Labian on the South Sulu Sea, some 17 nautical miles northwest of here.

Unlike in the past, sea fish is no longer that abundant in these island municipalities.

Bonajal said neighborhoods have tried livestock as an alternative to fishing. His own backyard goat-raising project failed apparently because of lack of market and the packaging.

Sibutu Island, with a limited access to electricity, is four hours away. People travel to the island by boat on rough seas from mainland Tawi-tawi. Lahad Datu, scene of the Sabah standoff, is closer to here than to the capital town of Bongao.

He said the banning of local fishers by Malaysian authorities had put to waste fishing implements given them by Secretary Makmod Mending Jr. of the Regional Department of Agriculture and Fisheries in the Autonomous Region in Muslim Mindanao.

Zaida Nurbit, a public school teacher, said there ought to be more alternative livelihood programs for the locals to improve their lot, following the Malaysian prohibition of fishing in what used to be a shared fishing ground.

Kim Ismula, a widow with seven children, is selling home-made crackers locally called “tokke.” Another, Neneh Arajani, has been making and selling a local pastry called “gintan.” Both products would be exhibited in the people’s convention on livelihood and community development called for by ARMM Governor Mujiv Hataman, Bonajal said.

But some village officials on Saturday opted to attend another forum on governance in a barangay (village) nearby, where they hoped to hear about their community’s future under the proposed Bangsamoro autonomy from mid-level executives sent in by ARMM Interior and Local Government Secretary Anwar Malang.

Residents were not too curious about normalization and disarmament, because the community has been peaceful, and that only policemen would carry firearms in their area. Instead, they are more interested in what constitutes the Bangsamoro waters in the five annexes of the Framework Agreement on the Bangsamoro that have been bilaterally signed, so far.

The area bounded by contour lines, 12 nautical miles parallel to shoreline would be close enough to the Malaysian territory of Tanjung Labian– some 17 nautical miles from Barangay Talisay in Sibutu —where Sama fishers used to have the best of catch in volume, variety and quality of fish species.

Jamalul Samuddin, 61, a boat captain, said he used to navigate to Tanjung Labian near Lahad Datu in two hours and 30 minutes from Barangay Talisay, with his medium-size vessel, the M/L Talisay Queen moving at average speed of seven nautical miles per hour.

Samuddin said two hours of travel on a southward course from the Sibutu Strait, the vessel would be navigating on an Indonesian water—Celebes Sea. This would mean that the nearest Malaysian and Indonesian territories are about 17 nautical miles from here.

He pointed to large tankers cruising the Sibutu Strait— which, he said, were navigating territorial waters of countries anywhere from China and Japan to the Philippines, Malaysia, Indonesia and to as far as Australia.

Interested to learn whether her people could still fish in Tanjung Labian, Hadja Zenaida Gampa, chairwoman of Barangay Poblacion in Sibutu, said she was attending the forum on governance and peace for an update on the peace process.

Selma Joe and Ma’amina Julkanain, chairpersons of Talisay and Amilhamja Jaafar, respectively, said they would attend a Davao convention this week, where Hataman would unveil livelihood programs to prepare the ARMM for a transition to the Bangsamoro autonomous government.

ARMM Executive Secretary Laisa Alamia said part of the transition mechanism would be the formation of the ARMM-Bangsamoro Reconstruction for Inclusive Development on Growth and Equity (ARMM-Bridge), a lead group which would directly engage local people’s organizations in community-driven development projects, meaning government program or projects, which they would help determine as their communities’ priority collective need for a general welfare.

Samuddin recalled that in the 1960s through the 1970s, Tawi-Tawi was supplying commodities to Sabah, including soda drinks, canned goods, cigarettes and even rice. The irony is that they are now the ones importing goods from the Malaysian state, according to Samuddin.

The Mindanao State University (MSU) campus here remains the nearest and cheapest option for the locals to send their children to college. Suiaba Usim, 63, said she did not want her five grandchildren to grow uneducated like her. She said she was thankful to their community organization and volunteer teachers who taught them basic literacy and numeracy introduced in 2012 by the ARMM Social Fund Project (ASFP).

Filipinos in Sabah evacuation camps get relief from PH