Filipinos in Sabah evacuation camps get relief from PH 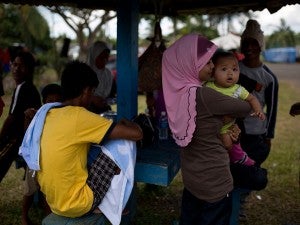 Residents of Tanjung Labian gather at the evacuation centre in Embara Budi near where the Malaysian troop launched an assault against armed Filipino gunmen in Tanduo village on March 8, 2013. AFP FILE PHOTO

MANILA, Philippines—Unable to gain direct access to Filipinos displaced by the conflict in Sabah, members of a humanitarian mission from the Philippine Embassy in Malaysia are coursing relief goods though community leaders manning  evacuation centers, the Department of Foreign Affairs said Friday.

The humanitarian/consular team also processed and issued travel documents and passport extensions to Filipinos there.

“Full access to the Filipinos in the evacuation centers has yet to be given by Malaysian authorities to the humanitarian/consular team,” the DFA said in a statement.

In Tawau, the DFA said, the humanitarian/consular team assigned there processed 348 travel documents for Filipinos who expressed a desire to be repatriated, and is making arrangements for their repatriation to the Philippines.

The DFA said the embassy continues to extend consular services and assistance to Filipino nationals in Sabah.

Two officials from the embassy, including Vice Consul Francis Herrera, arrived from Kuala Lumpur early this week, and joined the humanitarian/consular team in Lahad Datu, specifically to provide passports and travel documents to Filipinos who wish to return to the Philippines.

“Despite the challenges, our humanitarian/consular teams are deeply committed to providing assistance to our nationals in Sabah. One of the most important pillars of Philippine foreign policy is assistance to nationals, and we are working double time in providing it to them,” the DFA quoted Philippine Ambassador Eduardo Malaya as saying.