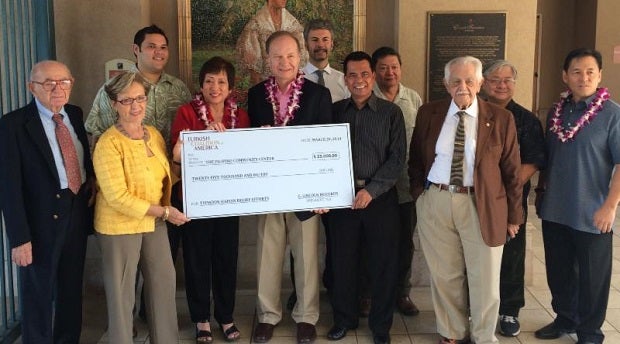 HONOLULU, Hawaii —The Turkish Coalition of America on March 20 presented a $25,000 donation the Filipino Community Center in Waipahu, Hawaii, to aid the Typhoon ‘Haiyan’ relief efforts, an amount that was matched dollar for dollar by the Consuelo Foundation, a Hawaii-based nonprofit.

The donation was the result of a national Turkish American donation drive, which TCA spearheaded and organized in collaboration with Turkish Philanthropy Funds.

All of the money raised will go directly to rebuilding efforts on the ground in the Philippines. This is the second of four $25,000 donations pledged by TCA to Filipino organizations in the U.S.

TCA President G. Lincoln McCurdy said, “In the aftermath of one of the world’s most devastating storms, we hope that the donations to Filipino organizations in Maryland and Hawaii will provide much needed relief to the people of the Philippines while also beginning a long and fruitful relationship between the Turkish American and Filipino American people.”

“I was touched and deeply moved by the Turkish Coalition of America’s contribution to assist in Typhoon Haiyan relief efforts,” said Congresswoman Colleen Hanabusa (D-Hawaii).

“As Mr. McCurdy shared in his comments this morning, in today’s world we reach out not only across borders, but across oceans to help those in crisis, compelled to act by our own memory of others who helped us in a time of need. I hope the generosity of the Turkish Coalition will inspire many others to lend a hand wherever challenges arise,” she added.

Jon Matsuoka, president of the Consuelo Foundation, said, “We are very grateful to the Turkish Coalition of America for bringing our communities together with their thoughtful donation, which will be used strategically to rebuild Filipino communities stronger than they were before Typhoon Haiyan.”