Jennifer Hudson, everybody else were Filipinos at Pinoy Relief Concert at MSG

The simplicity of the request flustered Tony Alvarez. He had come from New York to the Philippines with his family and the newly formed Pinoy Relief Fund to help the victims of typhoon ‘Haiyan’ in Tacloban. “All he could hear was ‘boats.’” 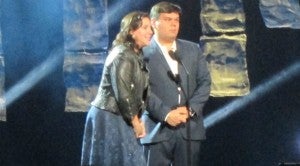 Tony was telling his story at the Madison Square Garden last Tuesday, March 11, as the two-hour-long benefit concert was winding down. He pointed his finger to the seats, where the audience sat, and thanked them for coming.

“We are at the Garden,” he said proudly, as he thanked the people who worked with him and his wife, Abigail, in the ravaged areas of Central Visayas. The hard work and efficiency of his group was up on the big screens for all to see.

There were vignettes of schools and shelters being built; boats with the Pinoy Relief logo venturing out to the high seas; and interviews with residents—fishermen, educators, relief supporters, ordinary folks, children trying to make it through the day. The guest artists of the night looked up to witness it, too. 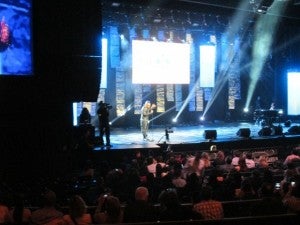 Interspersed with all these videos were of young Americans, some with Filipino heritage, pledging their continued support for the typhoon victims. Everybody was a Filipino last Tuesday or, more precisely, Pinoy. it’s a term of endearment you never hear in such a mainstream event, because it’s slang that most Pinoys would only dare use with fellow Pinoys. Now, “Pinoy” is mainstream.

For this reason, the most diverse mix of talents assembled onstage were, for one night, Pinoys, too, even glaringly non-Filipinos like Jennifer Hudson, Pentatonix, Plain White T’s and A Great Big World who performed first.

How can Jennifer Hudson not be Pinoy when she sang two songs close to Filipinos’ hearts?  Her medley of “Saving All My Love For You” and “And I Am Telling You” was easily the most thunderous of the night; it hopefully should scare life-threatening storms from coming to the Philippines. The audience responded accordingly with a boisterous standing ovation.

Most of the American acts sang three to four songs, dedicating their performances to the victims of typhoon Haiyan. Those who could not make it expressed their support on the big screen, like Imagine Dragons’ Dan Reynolds. 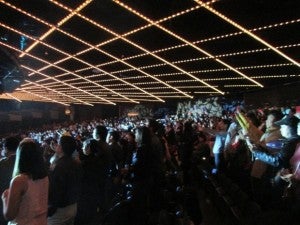 When it came to the Filipino acts, American Idol finalist Jessica Sanchez had the crowd singing and dancing as she sang “Clarity.” Later, she sang “Let it Go,” with composer Robert Lopez at the piano. Fresh from his win at the Oscar’s, Lopez came with his wife, Kristen Anderson, as they both spoke about their support for the victims of typhoon Haiyan. Filipino DJ Poet Name Life let his electronic beats do the talking.

Unfortunately, Tacloban’s pride, The Reo Brothers, performed only one song, the Beatle’s “Help!” when they could have taken the entire night for themselves. That goes to show you how many talented Filipinos are out there.

Why no Pinoy song?

It was also a night to see Charice after her long hiatus from performing in the States, where people were seeing her for the first time as an openly gay performer. Yes, she is if you have not heard of it yet. She opened the song with “At Last!” her single “Pyramid” and “Crazy in Love.”

In a city where different cultures are embraced, our Filipino artists could have performed a Filipino song. Dante Basco, Hollywood actor, rapped about taking pride of his skin color, but it was in English.

Black Eyed Peas’ APL De Ap came onstage to say how much he envied all the performers, because they got to sing. He sang a few lines of “Balita,” the activist’s anthem by Asin. He was off to a good start, but he stopped when the Filipino crowd was about to sing along, as he introduced Charice.

It was a missed opportunity on two fronts. It could have showcased a Filipino song to a mainstream audience. Observing the Filipino crowd, it was the one thing missing for them to complete their night; if only the Filipino artists on stage came together for one final song to rally the people to the cause of Pinoy Relief Fund. A Filipino song sang at MSG? Now that would have been historic!

The Theater at MSG was packed and certainly enough to launch a thousand fishing boats –and hopes — in the Philippines. All proceeds of the concert are expected to go to relief efforts in the affected areas.

Tony Alvarez said the $500,000 the Pinoy Relief initially donated was not enough. The relief concert was just one way of getting more donations; tapping celebrities, artists and various sponsors to help is another thing. For instance, Mehmet Oz of TV’s “Dr. Oz” was also at the concert to encourage more people to donate.  Oz acknowledged the Filipino nurses he has worked with in New York hospitals and how he is helping Pinoy Relief meet its target of $5 million in donations.

Rebuilding a city is a huge undertaking. Alvarez said he would continue to help Filipinos back home with three things—rebuilding schools (now 9), homes (20) and yes, fishing boats (72). It’s a lifelong commitment now, as he aims to provide relief anywhere in our disaster-prone country. So for those appealing for Temporary Protected Status for undocumented Filipinos in the States who want to donate or rebuild people’s lives and properties, here’s an opportunity to reach out to Tony. He owns a management consultancy firm in New York.

A good indication he may just listen was how his voice cracked as he told his story about someone in Tacloban who motioned to him, not to ask for help, but to offer him food, “Are you hungry?”

It was a generous gesture, typical of the Filipinos’ innate hospitality.

Tony also recalled a lesson he learned as a young man from the Philippines. “Give a man a fish and you feed him for a day; teach a man to fish and you feed him for a lifetime.” As he surveyed the damage wrought by typhoon Haiyan to the fishing villages in hard-hit Tacloban City, he understood what the request for fishing boats was really about. Because 70 percent of people’s livelihood is fishing, people there need fishing boats to feed not just their families but the entire village, even Tony.

“Fishing boats!” It was that simple a request, but it tells us more. It tells us how resilient these Pinoys are, even if they need more support.
To donate, visit pinoyrelief.com

The author can be reached at [email protected]  Follow @dennisclemente