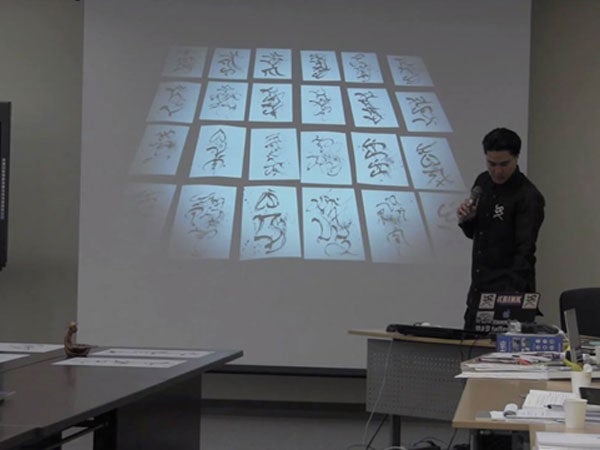 SAN FRANCISCO, California — Filipino script artist Kristian Kabuay represented the Philippines and the diaspora in the International Workshop on Endangered Scripts of South East Asia on Feb. 28 at the Tokyo University of Foreign Studies.

Kabuay describes himself as an artist of “baybayin” — incorrectly known as “alibata”– an indigenous pre-Filipino writing system.

During the workshop, Kabuay lectured on “Philippine Native Scripts as Identity Promotion and Preservation in the Filipino-American Diaspora through Art,” focusing on similarities between the said scripts and the ones of Indonesians and Malaysians.

He also discussed Filipinos’ awareness of the scripts and how they can be used to strengthen cultural awareness within and outside the country.

“A couple of coordinators know of my work and it was great learning experience because I got to share thoughts with a lot of academics about South East Asian scripts,” Kabuay said

“The best was talking to the Indonesians where I see a lot of similarities with baybayin. We as Filipinos don’t really acknowledge the origin of the scripts and how it is well related with Indian culture as the main source of it,” he added.

Before starting the lecture, Kabuay did a live demonstration, showing the stroke system that he uses to produce his art. He explained the cultural value of the scripts in developing countries and how they get pushed aside for economic value. So, he outlined the economic and social value of “baybayin.”

According to Kabuay, “Learning the cultural connections between South East Asian scripts makes me realize that they are the visual representation of the language. It has been incorrectly known as ‘alibata’ for a long time. I mainly discussed the value of the scripts in modern context.”

To know more information about Baybayin and Kristian Kabuay, you may visit: www.baybayin.com.