Filipino’s Pinatubo photo named among greatest of all time 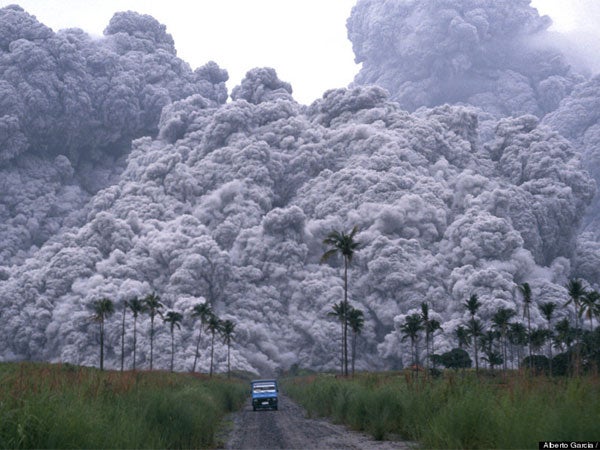 The driver of a pick-up truck desperately tries to overrun a cloud of ash spewing from the volcanic eruption of Mt. Pinatubo in 1991. ALBERTO GARCIA/CONTRIBUTOR

• Picture captured a pick-up truck running away from ash storm

• Photographer took the shot while running for his life

LAS VEGAS, Nevada — A photograph of the eruption of Mt. Pinatubo has been selected as one of 38 emotion-packed pictures of all time by an American online publication.

In an article titled, “32 Heart-Stopping Moments You Can Only Experience Thanks To A Camera,” the Huffington Post picked the iconic picture of a driver in a pick-up truck running away from a storm of ash spewing from the volcanic eruption in 1991.

It was the latest accolade for photographer Alberto Garcia, former chief photographer of Tempo, a Manila tabloid affiliated with the Manila Bulletin.

” I am happy and grateful. At  least after more than 22 years, they still remember how I captured the eruption of Mt. Pinatubo,” said Garcia when reached from his home in Edmonton, Alberta, Canada, where he is now based.

Even though the eruption happened those many years ago, Garcia said he feels like it happened yesterday, and his capture of the event is still vivid in his mind.

He said that when the Philippine Institute of Volcanology and Seismology (Philvolcs), raised the alert level on Mt. Pinatubo, he immediately informed his photo agency based in New York about the situation.

“It took me 30 minutes to prepare my things and headed back to Zambales where the Philvolcs[1]  people were stationed,” he said. “When I took the picture, my heart didn’t stop, it beat so fast and my body was shaking.”

He said that during the major eruption, they were about 20 to 30 kilometers away from the mouth of the volcano, and suddenly were being pursued by tons of hot ash.

” So everybody jumped into our vehicles and I was trying to put on my gas masked when I saw a blue pick-up ahead of that beautiful wall of gray,” Garcia said.  “I opened the door and tried shooting the picture with my 50mm lens but it was too tight, so I decided to change the lens and used the 24mm instead and made sure my setting was correct and shot eight frames.

He said they finally outran the hot ash, and “although I had only eight shots, I rewound the entire roll of film, keeping it safe in my pocket.”

They spent more days documenting the aftermath of the major eruption before going back to Manila. He called a friend to process the film.

“I went straight to the airport international cargo and shipped the negatives to Time Magazine office in New York. The following week, the Mt. Pinatubo picture ran in a two-page Time Magazine spread,” Garcia said.

Time, Newsweek, and Asiaweek all included the picture in the 1991 great images of the year. In 1992, the picture won first place in the nature and environment category in the World Press Photo competition held in Amsterdam.

So far Garcia is the only Filipino photographer to have won the World Press photo competition. In year 2001, the National Geographic Magazine published a book called “100 Best Pictures,”  which included Garcia’s Mt. Pinatubo photograph.

Also in 2001, Time published a book called “Time: Great Images of the 20th Century” featuring powerful images as Ali’s knockdown of Sonny Liston, the US Marines raising the flag at Iwo Jima, the fall of Saigon and the JFK assassination.

Garcia’s photograph was there too.

” When I took the pictures, I was praying hard  that I got the right shot,” Garcia said. “I knew we might die and before I die, I wanted to tell a story using my camera.”