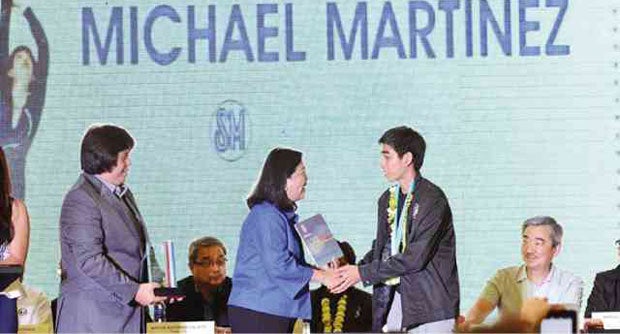 In a simple awarding ceremony at the SM Mall of Asia, Martinez was given the award in recognition for being the first Southeast Asian to qualify for the Winter Olympics. Handing him the award were SM Supermalls President Annie Garcia and Glenn Ang, Program Director of SM Global Pinoy.

The Notable Global Pinoy award is given as part of the SM Global Pinoy program as a tribute to outstanding Filipinos who have made a mark in the international arena. Among past awardees were international singers Lea Salonga, apl.de.ap of the Black Eyed Peas, designer Oliver Tolentino, Francis Libiran, pool player Efren ‘Bata’ Reyes, boxing sensation Manny Pacquiao, the Azkals soccer team , the Philippine Dragon Boat Team, Danica Magpantay and Chef Pablo “Boy” Logro.

Ang said Martinez is clearly a notable global Filipino because he is a world-class athlete who showed how talent, perseverance and determination could break barriers and biases to qualify for the Winter Olympics.

“Who would have thought that a figure skater from a tropical country like the Philippines could make it to the Winter Olympics? But Michael Martinez achieved this and his performance in that game was sterling. He certainly has a bright future ahead of him,” Ang said.

He further noted that Martinez has become an inspiration to many young Filipinos like him who want to pursue their dreams in whatever field.

“Michael showed us that nothing is impossible if one puts his or her mind and heart into it,” Ang stated.

Aside from the Global Pinoy award, Martinez was given a Lifetime Skating Privilege Card by the SM Lifestyle & Entertainment, Inc. to ensure uninterrupted use of the skating rink to hone his skating skills whenever he is here in the country.

SM launched the Global Pinoy Program in recognition of the sacrifices and contributions of the overseas Filipino workers. SM Global Pinoy Centers in its supermalls provide OFWs and their families convenience facilities, discounts and other privileges.