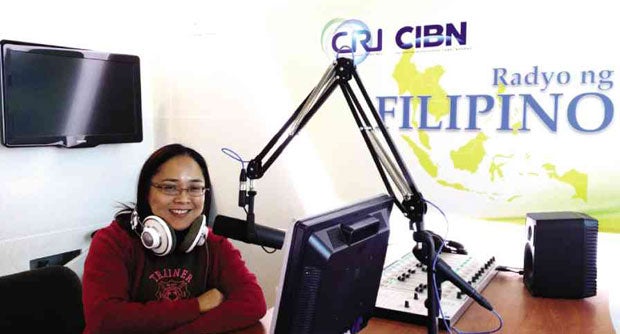 Amidst the political issues confronting the Philippines and China, a Filipino journalist is creating opportunities for mutual understanding between the two countries. She is making waves in China, literally through the radio.

Machelle Adigue-Ramos carries this crucial yet challenging task through her work at China Radio International (CRI), a state-run radio broadcast service catering to the global audience.

Ramos works for the station’s Filipino service that delivers news and other stories on China and the Philippines in the Filipino language. She works as a news editor and program roducer with two weekly radio programs under her name. She  hosts “Mga Pinoy sa Tsina” program that features the struggles and successes of Filipinos living in China. The other is “Pelikulang Tsino Nood Tayo” that features her personal reviews on Chinese films.

It was in a previous job at a state-owned media organization in the Philippines that led Ramos to an unexpected opportunity to work for CRI. A graduate of Broadcast Communication with a Master’s degree in Public Administration at University of the Philippines Diliman, she was still working for the government-run People’s Television Network (PTV4) when she attended a three-week seminar in China. during a media tour there, she met some people working for CRI’s Filipino Service.  After the seminar ended, she met them again for “exploratory talks” before going back to Manila. She expressed interest.  Finally in December 2011, she spent her first winter in Beijing as a foreign expert working for CRI.

For Ramos, it was  an opportunity of a lifetime that came at the right time.

Ramos proved to be more than capable to work in a Chinese media organization. Her years of experience working for PTV4 writing and producing educational, entertainment, sports, and current affairs programs came in handy as she carried out her duties at CRI.  Her work at PTV4 had also allowed her to work with foreign media counterparts from the 10 Asean member countries, as well as NHK Japan and Channel News Asia. By then, she had already gained enough confidence to take the next logical career step that led her to pack her bags and say Ni Hao China!

Ramos’ experience in PTV4  definitely helped her adjust to her work at CRI, given that both are state-owned media organizations. However, there are also institutional differences between the Philippine and Chinese political systems in which media organizations operate. Compared to a more open and democratic Philippine media, China maintains a stricter and more codified media environment.

For Ramos, CRI’s system of gathering news is different from PTV, which she still continues to learn and adapt to. “One time I attended a press conference and I was surprised to be handed a printed copy of the official’s speech. I thought “Ayos! I don’t have to transcribe it and I will get a perfect quote. In Manila, it is sometimes difficult to get an exact speech. You have to transcribe it to get the soundbyte.”

Aside from adjusting to a more regulated media landscape in China, Ramos had to deal with her language problems—both Chinese and Filipino. While learning Mandarin Chinese is a logical necessity in her job, improving her Filipino was just as important, especially since she edits news and hosts her radio programs in Filipino.  She also has to oversee the scripts of the Chinese staff for their radio programs and blogs, and guide them with their enunciation as they read their scripts in Filipino.

Though most of the Chinese staff in CRI’s Filipino Service is adept in the language (most of them are graduates of Peking University’s Philippine Studies Program), they are prone to speaking and writing in formal Filipino—the way they learned it in school.  According to Ramos: “Believe it or not, in the beginning, I have to adjust to their manner of writing and the way they speak in Filipino.”

Despite these minor challenges, Ramos finds fulfillment in working for CRI that ultimately enables her to build a bridge of understanding between the Chinese and Filipinos. In particular, her “Mga Pinoy sa Tsina” program allows her to feature first-hand experiences and personal views of Filipinos about China. The episode about the “Big 3 Filipinos in Media” (Jaime FlorCruz, Chito Sta. Romana and Eric Baculinao), who were student activists exiled in China during martial law in the Philippines, gave rich insights into China as a rising power.

Moreover, her program at CRI highlights the success of Pinoy professionals who have carried their own brand of Filipino excellence to China.

Ramos has featured Alex de Dios, a landscape architect based in Beijing who dabbles in  photography. Recently, he won second place and an award of excellence in a prestigious photography competition dubbed “Beijing Spirit in the Eyes of Foreign Friends.”

Through the program, Ramos has also met with Judith Los Baños, director of marketing for the Hai Nan Airlines Hotel Group who made great contributions to the company’s Tangla Hotel Tianjin that was recently recognized with an International Six Star Diamond Award.

Shares Ramos: “I have interviewed Jennifer Enguio, a Cebuana who first came to China as a domestic helper in 2004. But now, at age 30, she is a manager of a very famous restaurant that seats 300 guests in Guangzhou.”

For Ramos, the chance to do stories about Filipinos in China is very rewarding. This inspires her to continue presenting a positive image of the Philippines in China. She thanks these Filipino professionals for entrusting her with their stories.

“All of them have supported my ‘cause’ to show that Pinoys in China are good laowais (foreigners). They all make me proud to be a Filipino here.” And as she shares their stories and reaches out to fellow kababayans through her voice on the radio, Ramos has likewise made us proud to be Filipinos.