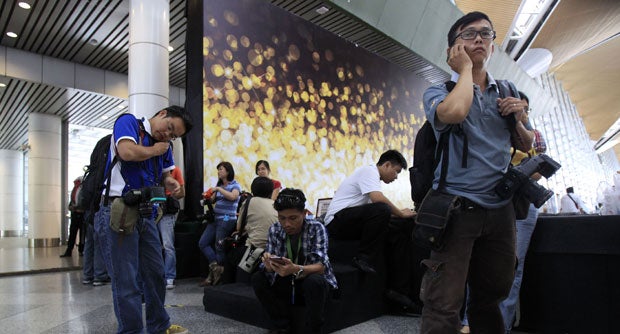 Journalists wait at the entrance of reception center and holding area for family and friend of passengers aboard a missing plane, at Kuala Lumpur International Airport in Sepang, outside Kuala Lumpur, Malaysia, Saturday. AP

MANILA, Philippines—The Philippine military will continue with its search for a missing Malaysian Airlines plane until Malaysian authorities officially declare that it has been found off Vietnam’s coast, Defense spokesperson Peter Galvez said Saturday.

Galvez told the Inquirer by phone that as of 2:30 p.m., Manila had yet to receive word on the whereabouts of the Malaysia Airlines jet that had 239 people on board. Most of the passengers are Chinese.

“We will continue our search for the aircraft within our territory until Malaysian authorities officially declare where it really is,” Galvez said.

Media quoted Vietnamese naval officials as saying that the plane had been found in Vietnamese waters.

No Filipinos were on board the commercial jet, the airline management said.

China-bound Malaysian jet vanishes with 239 aboard