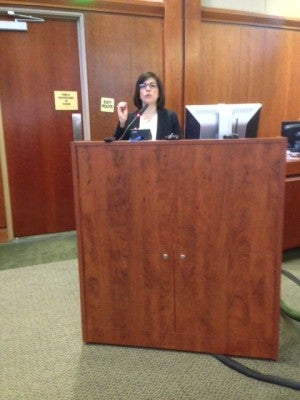 With a recent press briefing on this city’s water supply condition and tour of its facility, the Water District went on full campaign mode about the dangers of water shortage and the drought, specially reaching out to ethnic media and their readers and viewers. It capped the briefing with a visit to the Silicon Valley Advanced Water Purification Center, which is under construction.

The drizzles and slight rains in the past few weeks didn’t do much to alleviate the drought felt throughout the state, explained program administrator Marty Grimes. “We need four to six big storms just to get to the average.”

Grimes said an average 20 to 25 inches of rain are needed in the mountains and about 40 to 45 inches in the Santa Cruz Mountains. “The current average in San Jose is .14 inches. We’ll need seven times more than that to get to the ideal average,” he said.

Santa Clara County is at the heart of Silicon Valley, known for its high-tech companies and manufacturing plants. The latest California Immigrant Integration Scorecard reports that nine percent of immigrants in the county are from the Philippines.

Tagalog is spoken in 14 percent of immigrant households, second only to Spanish. The County has a relatively low linguistic isolation (or the proportion of immigrant-headed households in which persons over 13 speak English only or very well).

Mang Berto, who lives in a senior home, is heeding the call for water conservation. He says he will conserve water by “doing the forbidden and taking out my tabo.” His tabo or dipper is actually a re-purposed casino coin bucket. He brings home a couple of new ones every other week.

Amelia, a housewife, said she took one of the five-minute digital counters issued by the Water District and used it with both tabo and timba (pail) to cut shower time in her home.

Alvarado told the press, “Because of careful management, we are fortunate we still have our groundwater supply. We’re in okay shape, better than in some parts of the state.”

But at its meeting last month, the county board called for a 20 percent water use reduction, doubling the number from its January 28 advisory. With the worsening condition, the Water District revealed to the press not only its state-of-the-art processes and facilities but also its alternative projects to find new sources of water.

One of its infrastructure projects is the retro-fitting of the old technology that is the Anderson Dam in Morgan Hill. The dam is an earthquake risk and the State Department of Dams warned against filling Anderson Dam even if there were enough water. It will cost $185 million to do this, beginning in 2016 with a scheduled completion in 2019.

A decision has yet to be made on the Bay Delta Conservation Plan. The state is proposing a major project to address the water, habitat and earthquake reliability problems of the levees in the Delta.

In November 2012, Santa Clara County voters approved a major parcel tax to allow the Water District to ensure a reliable water supply. One way to do this is to remove toxins and hazards in the water (such as the mercury in the Guadalupe River where posted signs warn not to eat the fish). The property tax is also funding the Water District to protect the water supply from earthquakes, floods and other disasters, to provide habitat protection and provide open space. According to their website, this is a 15-year program.

Nearing completion is the Silicon Valley Advanced Water Purification Center. The $68-million facility is said to be the largest of its kind in Northern California. It will highly purify waste water by using not two but three processes: microfiltration, reverse osmosis and ultraviolet light. This technology is only used in Orange County, Australia and Singapore, Alvarado said.

According to Purification Center Operations and Maintenance Manager Chrystal Yasmin, the Center provides recycled water in the bathrooms for the new 49ers stadium. It would process eight million gallons of water every day. She explained that ultimately, the goal is to take from the nearby Regional Waste Water facility and process it to be drinkable water. “We have the technology for it.”

While releasing fluoride into the water supply is still being debated, Alvarado said, “We have a very high quality tap water in Silicon valley. No need to spend on plastic bottled water.” It’s a way to save money and “also prevent litter and pollution. We really encourage people to drink tap water. We continuously test the quality of our water and we’ve never had it out of safety range.”

The water would also be tested for trace metals at another lab. Metals like aluminum, iron, zinc and chromium (a carcinogen and best remembered in the 2000 movie, Erin Brokovich, starring Julia Roberts) are monitored. “We’re looking for one part per billion—like one penny in $10 million.”

At the Organic Semi-volatile Analysis Lab, their equipment tests for traces of pesticides, hormones and personal care products (like perfume, pomade, toothpaste, etc.)

The treated water comes out 100 percent clean but if it flows into old pipes at some homes, the water could get contaminated again.

Alvarado said, “You’d think that with all (of the processes) I have told you, water would be expensive.  It is actually very inexpensive—about a penny per gallon. The water we have today is the same water—maybe in different form—in the days of the dinosaurs. We can create a lot of things with water. And anything we wear or touch uses water.”

[Call the Water Conservation Hotline at (408) 630-2554 to receive free water conserving devices like low-flow shower heads, kitchen and bath faucet aerators and toilet leak detector tablets. You can also dial Water-Wise House Call at (800) 548-1882 to have your water use audited by an expert for free. The County also has a new High Efficiency Toilet (HET) rebate program that rewards $125 to qualifying premium high efficiency toilets and up to $50 for qualifying non-premium high efficiency toilets. Other savers offered by the Santa Clara County include a landscape conversion rebate program, a clothes washer rebate program and a new gray water (from showers, bath tubs and washing machines) laundry-to-landscape rebate program.]

Read Next
US justice official cites use of rewards, threats in fight vs corruption
EDITORS' PICK
Eleazar: PNP open to ICC probe but PH judicial process is working
P258M shabu seized, Chinese national arrested in Manila drug bust
Gilas out to prove Korea win not a fluke; Tab fires back at ‘lucky shot’ remark
SANTIS Delicatessen: The road to survival is sweet and savory
Man wounded as raid on illegal cockfight in Isabela leads to shootout
Piolo Pascual: The Ultimate Heartthrob continues to level up
MOST READ
Palace: Face shields no longer needed to be worn outdoors
LOOK: ‘Low vaccination’ turnout in 4 Manila sites after no walk-in policy
Lacson or Pacquiao a possible presidential candidate for NPC – Sotto
‘Pinadudumi ang politika:’ Sotto wants FB to shut down ‘troll farms’ until after 2022 polls
Don't miss out on the latest news and information.