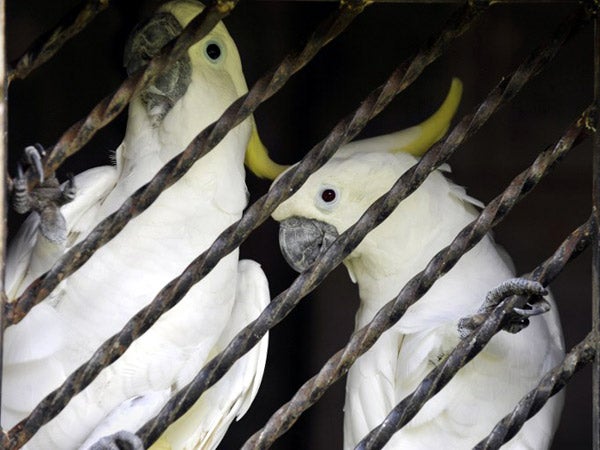 MANILA, Philippines—Wildlife authorities have seized 93 exotic animals from Indonesia, Australia and Papua New Guinea, including wild birds, reptiles and mammals, which were smuggled into Mindanao in the second such haul in just two weeks.

Among those confiscated were 66 wild birds, including a rare Pesquet’s parrot, and mammals such as a long-beaked echidna, wallabies, a Malayan box turtle, and 10 sugar gliders—squirrel-like animals that can glide from tree to tree.

The exotic animals, which include vulnerable and critically endangered species, were seized by maritime police in the waters off Mindanao on Saturday, said Ali Hadjinasser, the regional chief of the government wildlife board.

Authorities have quarantined the exotic animals and are now coordinating with their countries of origin for their possible repatriation, an official said Wednesday.

The seizure came just a week after wildlife officers in Mindanao found almost 100 similar animals from Australia and Indonesia, being transported by van to Manila.

“They (the two shipments) could be connected. They may have one source because the animals were almost the same types. They may have a large stock so they may have divided it into two,” Hadjinasser told AFP.

He said the animals were so rare even the wildlife officials could not identify them, and had to ask Filipino hobbyists for help.

About a third of the animals in the first shipment have died in transport, while 40 percent of the second shipment had perished, said Theresa Mundita Lim, director of Biodiversity Management Bureau.

The two illegal shipments came within a week of each other: on Feb. 15 and Feb. 22, in Surigao and General Santos cities, respectively, raising suspicion that the same group of wildlife traffickers was responsible.

Two men in the first shipment and five men in the second who were caught transporting the animals in vans were arrested.

She said the animals, some of them listed as “critically endangered,” and originating from Indonesia, Australia and Papua New Guinea, were undergoing health checks while under quarantine in the two cities where the shipments were intercepted.

One of the seized birds was a black palm cockatoo, an Appendix I species under the Convention on International Trade in Endangered Species of Wild Fauna and Flora (CITES). The cache also included Appendix II species including a Pesquet’s parrot, as well as lories and lorikeets.

Appendix I species are considered to be under threat of extinction, while Appendix II species are those whose trade must be controlled to ensure their survival.—With AFP report