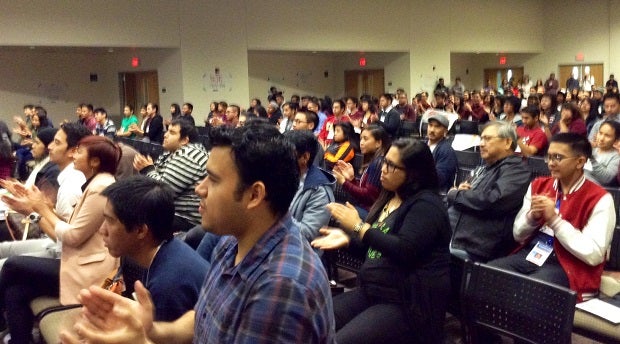 A group view of the students and teachers who attended the Summit FUNcilitators of Bonn Hildalgo and Decie Reyes Professor Allyson Cubales. PHOTO BY LAWRENCE C. OCHOA

RIVERSIDE, California—More than 500 Filipino American college students from all over the state met at the seventh annual summit of the Southern California Pilipino American Student Alliance (SCPASA) on Feb. 8 to explore issues facing “millennials.”

Held at Highlander Union Building, University of California, Riverside in collaboration with the Katipunan Pilipino Student Organization, the SCPASA Summit is a one-day conference with a wide variety of speakers, activities, workshops and entertainment. The workshops covered themes of leadership, self-identity, activism and community.

This year, SCPASA and Katipunan chose “Tomorrow in Retrospect” as the theme for the summit, emphasizing the importance of “history in our lives.”

Khryztine Ilagan, programming director of SCPASA explained: “’Tomorrow in Retrospect’ is about making an initiative or stand towards creating a better future by looking at the past and learning from that.”

The summit is aimed at making the second generation “understand our folks’ history and thus bridge our common cultural upbringing with one another,” said Adrian Velasco, chairman of the SCPASA.

“My generation is practically raised by the norms of the Internet and the social media, which conflict with the way we’ve been raised in our Filipino homes,” observed sophomore student Bonn Hidalgo.

“People can say what they want online,” he added. “At home, we follow politeness and civil behavior.”

Hidalgo lamented that it gets confusing to young people raised in mixed cultures to transition from one standard of conduct to another.  He said that even at the conference he was amazed that common courtesy and manners were not observed—“like saying ‘thank you’ when the doors are held open.”

Hidalgo was one of SCPASA’s FUNciliators” (a catchy term to identify event volunteers) who lead some 40 groups of 12 in tackling pressing issues. “In social media we can just say what we want,” he continued. “How do we reconcile these with the norms of our traditional families – what is acceptable?

“I’m glad to share my parent’s ‘restrictive’ guidance with others like me in this conference,” said junior student Decie Reyes.

“It’s heartening that I’m not alone with parents who are strict and who do not want us to get jobs and to just concentrate on our studies,” said Reyes, who is currently an associate campus coordinator for an apartment complex near UCR.

Eddie Bernardo of UC Riverside was ecstatic. He said that through the convention he understood his cultural roots and problems of the immigrant population.

“It’s always a shock when I’m asked why my family moved to America,” says one young oral historian.  “This always makes me ponder about the sacrifices my parents had to go through in leaving our mother country – to give us, their children, better opportunities.”

Some of the stories posted were: “My dad served in the US Air Force for more than 20 years.  He’s done a lot for our family and I’m so proud of him”; “I’m the first of my family to go to college… it was a struggle but with the love and support of my family, I’m a college student.”

An anti-martial law activist in the ‘70s whonow teaches Philippine American history, Kimbrough said, “‘Saysay’ collaborates with other community groups like The FilAm Arts with a long-term goal of creating a searchable archive of oral history that will be available to artists, scholars, students and everyone interested in experiencing the living, breathing history of Filipinos in the US.”

SCPASA Public Relations Officer Jeffrey Surban said SCPASA has grown bigger: “We were able to get newcomers such as Kapatirang Pilipino from the University of California at Santa Barbara, the Pilipino United Students Organization from Occidental College, and even the Pilipino American Student Union from Stanford University to join our events.