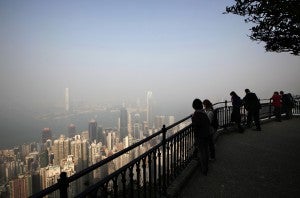 HONG KONG — Hong Kong on Monday received its first official group of maids from Myanmar since the former junta-ruled nation allowed its citizens to work abroad as domestic helpers, as the city tries to plug a shortage.

An initial group of 19 women — drawn from around 200 expected over the next three months — arrived in the semi-autonomous Chinese territory, said the agency which arranged their employment.

They are the first group legally in Hong Kong following a change last year to Myanmar’s migration law as the nation opens up.

Some 300,000 helpers, mainly from Indonesia and the Philippines, are already in Hong Kong.

Concerns about the welfare of domestic workers have grown after an Indonesian maid was allegedly scalded and beaten repeatedly over an eight-month period by her Hong Kong employer.

Immigration Department data showed that 47 Myanmar nationals were already working in Hong Kong, but were brought in on an individual basis by fellow citizens with Hong Kong residency.

Campaigners from activist group HK Helpers Campaign said Myanmar women were the group “most vulnerable” to abuse in the region.

Activists handed out Burmese-language advice leaflets to the new arrivals at the airport Monday.

“They have limited skills in Cantonese and English. They are not Internet-savvy… They are probably the most vulnerable group (of maids) from Southeast Asia,” Tom Grundy told AFP.

Myanmar began to emerge from decades of harsh military rule in 2011.

Women from the long-isolated nation have been working legally for several months as domestic helpers in Singapore, but with limited rights according to Yangon-based Andy Hall, a migration activist and researcher.

He said Myanmar implemented “almost no regulation” on agencies wishing to employ the workers, and their fate in Singapore was “really concerning” and involved “serious debt bondage”.

Hong Kong is facing a potential shortage of domestic helpers from traditional providers.

Indonesia last year reiterated it would ban the export of domestic workers from 2017.

Between 1,000 and 2,000 maids from Myanmar are expected in Hong Kong in the next year, said Law Yiu-keung of the Golden Mind agency, which brought them to Hong Kong.

Foreign domestic helpers in Hong Kong by law must be paid at least HK$4,010 ($517) a month, are entitled to free food and accommodation, and receive statutory holidays.

Read Next
US says Philippine media murders are ‘deeply troubling’
EDITORS' PICK
Quarantine violations still punishable despite deleted provisions in ‘Bayanihan 2’ – Bato dela Rosa
‘Puno na lahat:’ Metro workers brave lack of public transport, rains on Day 1 of GCQ
Leveling up your ‘lutong bahay’ with the kitchen companion you never knew you needed
Someone from the Philippines can become $356 Million richer this Tuesday
BFP raises general alarm over Mandaluyong fire
Cherry Mobile teams up with Cloud Panda PH, launches online store
MOST READ
‘If I had not been SolGen, I will make you eat your words,’ Calida tells Coco Martin
Quarantine passes no longer required under GCQ, but curfew remains
5 car dealership outlets shutting down
BFP raises general alarm over Mandaluyong fire
Don't miss out on the latest news and information.