68 years of injustice and still counting 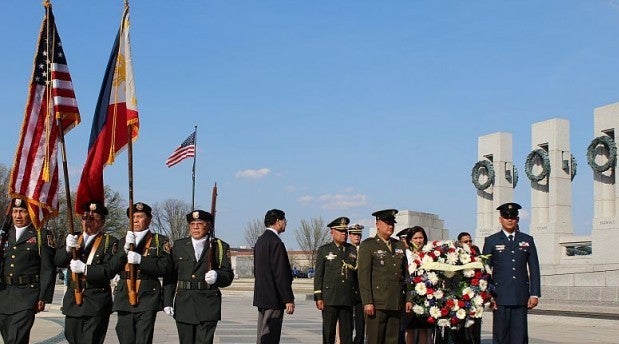 Filipino American community leaders, supporters, students and Philippine Embassy officials observing the 71st anniversary of the Fall of Bataan with a wreath-laying ceremony on April 9 at the World War II Memorial in Washington, D.C. FILE PHOTO

It has been 68 years—68 years since the Rescission Act of 1946 removed United States military service recognition and benefits to Filipino World War II veterans; 68 years under a pall of injustice for thousands of Filipino World War II veterans, who to this day, have not received their due; 68 years of ongoing hardships. Despite concerted action to correct the unjust treatment, most efforts have remained futile except for a few provisions adjusting some benefits. The harsh effect of the Rescission Act is still experienced by many veterans to this day.

George is a Filipino World War II veteran who is currently residing in California. He has a service-connected disability and is one of the few veterans receiving compensation from the US Veterans Affairs office. In January, he received a letter from the VA  notifying him of its intention to reduce his benefits to 50 percent of what he was currently receiving. What is the reason for the reduction of this benefit? What steps should he take to ensure his compensation benefit is not reduced?

Under this law, the Filipino World War II veterans, the New Philippine Scouts, recognized Guerilla Units and all those who served under the command of the United States Armed Forces in the Far East were denied eligibility for most veterans benefits including all non-service connected US veteran benefits. In effect, it reduced by 50 percent the service-connected benefits that these targeted individuals may receive relative to their American counterparts.

To correct this iniquitous treatment and injustice to the veterans, legislation that outrightly repeals the 1946 Rescission Act needs to be passed by the US Congress.

For many years, Filipino-American advocates attempted to correct the harsh effects of the Rescission Act. Several piecemeal amendments have been passed that provided some relief to some veterans but none that justly or completely addresses the veterans’ plight.

In 1999, the Filipino Veterans Improvement Act (P.L. 106-377) was passed into law that restored the 50 percent service-connected benefits back to 100 percent, but only for veterans residing in the United States.

The US government has yet to fully restore the rights, privileges and benefits guaranteed to, but were taken away from, Filipino soldiers of WWII.

In the absence of true equity legislation, US Veterans Affairs examiners have to reference the various laws, understand which benefits apply to which specific class of Filipino veterans, in order to determine the benefits that are to be received in any given application.

The case of George exemplifies this problem. It is true that the 1946 Rescission Act limited his benefits to the 50 percent rate for compensation but because this was corrected in 1999 under the Filipino Veterans Improvement Act for the Filipino veterans residing in the US, his benefit should not be

George’s case is to be heard by the Board of the Veterans Appeals so he may present evidence of his residence in the United States and argue that he should rightfully receive 100 percent of his disability benefit.

Every effort undertaken for the benefit of the Filipino veterans may no longer be felt by thousands of them as the population dwindles due to age, sickness, or outright despair.

A significant number of the elderly veterans in the US are resigned to their plight but hold on to the one real hope that at least in the near future, their adult children can immigrate and join them in the US.

A bill called the Filipino Veterans Family Reunification Act of 2013 sponsored by Sen. Mazie Hirono (D-HI) and Rep. Colleen Hanabusa (D-HI1) will benefit descendants of the Filipino veterans. If this bill is passed into law, children of Filipino veterans may take advantage of the exemption from the numerical limitation set by the US immigration quota system. This means that their petitions will all be processed outside the set quota and they need not wait for the priority dates to be current.

This bill specifically mentions that it will apply even if the Filipino veteran is no longer living, as long as there is proof of the veteran’s naturalization as a US citizen. Senator Hirono was able to tack this provision into the comprehensive immigration reform bill which was passed by the Senate. Unfortunately, the House of Representatives has as yet to take action in order to get the immigration reform bill passed.

Atty. Lourdes Tancinco may be reached at [email protected] or at 7211963 or visit her website at www.tancinco.com