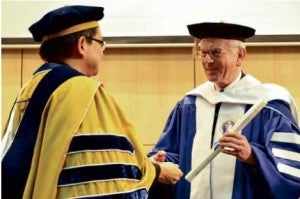 MANILA, Philippines—The Ateneo de Manila University on Wednesday conferred an honorary degree on Hans-Gert Poettering, former president of the European parliament and now chair of the Konrad-Adenauer-Stiftung (KAS), for his advocacy on European integration and human rights.

A German politician and leader of the parliamentary institution of the European Union from 2007 to 2009, Poettering received the honorary degree of Doctor of Humanities in special academic convocation rites held at the Ateneo de Manila University campus in Quezon City on Wednesday morning.

Ateneo president Father Jose Ramon Villarin handed the German leader a silver medallion and a replica of an image of the Sacred Heart carved by Philippine national hero Jose Rizal.

“It is heartening to note that in his advocacy of a Europe united in freedom, justice and peace, Dr. Poettering is a kindred spirit, having been influenced and shaped by the Christian view of the human person as espoused in Catholic social teaching,” Villarin said in his speech.

Villarin said Poettering, as chair of the EU Enlargement Working Group of the European People’s Party, advocated the enlargement of the European Union to embrace eight of the young democratic countries which emerged from the Eastern Bloc in Europe after the fall of the Berlin Wall.

The former communist states of Estonia, Hungary, Poland, the Czech Republic, Slovenia, Latvia, Lithuania and Slovakia were accepted into the EU in 2004, together with the island countries of Malta and Cyprus, the Ateneo president said.

The enlargement of the European Union, he said, led to “internal, institutional changes” across Europe.

He added that Poettering also demonstrated “extraordinary statesmanship in the drafting and ratification of a new treaty,” the Treaty of Lisbon, which strengthened the European Parliament and introduced significant improvements in EU operations.

The treaty was signed by the member states during Poettering’s first year as the president of the European Parliament in 2007.

The Ateneo also adopted the EU leader for his contributions to the university through the Konrad-Adenauer-Stiftung, a German political foundation that has been Ateneo’s partner in its advocacy, particularly on social development since the 1970s.

“I am deeply convinced that without independent media and qualified media professionals articulating the beliefs of the citizens, there is little hope that democracy can become inclusive and protected against the misuse of its decision makers,” Poettering said.