A conversation with Chinese friends about Aquino and China 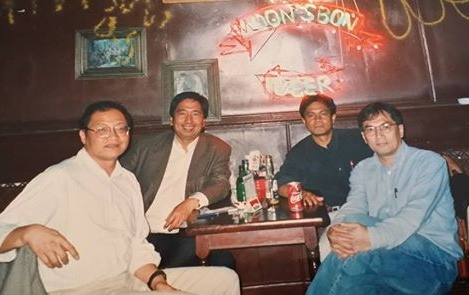 SAN FRANCISCO – I had lunch last week with two long time Chinese friends I first met when we visited China together in 1998. While in Beijing then, I introduced them to my old friends from my First Quarter Storm (FQS) days in Manila who had been living and working in Beijing since 1971 and who were all coincidentally managing the China bureaus of their media agencies– Chito Sta. Romana (ABC News), Eric Baculinao (NBC News), and Jimmy Flor-Cruz (Time/CNN).

During our lunch, we reminisced about those old times and inquired about each other’s families before the topic turned to Pres. Benigno S. Aquino’s remarks about China which appeared in the New York Times on February 4, 2014.

My friends told me they were in Beijing when they read the blazing headlines in the newspapers  -“Philippine president compares China turf claims to Nazi legacy”. In the interview with The New York Times, the Agence France-Presse (AFP) reported that Aquino called for “world leaders not to make the mistake of appeasing China as it seeks to cement control over contested waters and islands in the strategically vital South China Sea.”

The newspapers described Aquino as calling on “nations around the world to do more to support the Philippines in resisting China’s assertive claims to the seas near his country, drawing a comparison to the West’s failure to support Czechoslovakia against Hitler’s demands for Czech land in 1938.”

My friends described the furious Chinese reaction to Aquino’s comments which were roundly denounced by China’s state-run Xinhua news agency.  In editorials published and aired in all the Chinese media, Xinhua declared that Aquino’s “latest reported attack against China, in which he senselessly compared his northern neighbor to the Nazi Germany, exposed his true colors as an amateurish politician who was ignorant both of history and reality.”

That’s the difference between China and the Philippines, I told my friends. In China, every TV, radio and online news report has to kowtow to the official government script that “Aquino is an ignorant fool who does not know anything about history.” No Chinese reporter or commentator would dare disagree with the Chinese government’s official line.

But in the Philippines, I told them, China’s supporters like Rigoberto Tiglao, the former spokesman of Pres. Gloria Macapagal Arroyo (“China’s favorite Philippine president” I told my friends), are free to denounce Aquino for his remarks. As viciously as they care to.

For example, in his Manila Times column on February 6, 2014, Tiglao wrote: “Aquino likened China’s claims over the Spratly Islands to Hitler’s demand in 1938 for Czechoslovakia’s Sudetenland region to be turned over to Nazi Germany. Aquino’s analogy is something only an ignoramus would make… How many people live in the disputed Spratly Islands area which Aquino likens to Sudetenland?”

So does that mean it’s okay for China to seize the Kalayaan Island Group because only a few hundred Filipinos live there unlike the Sudetenland where, Tiglao reported, “22 percent of Czechoslovakia’s population, or 3.2 million people, who considered themselves ethnically Germans, lived”?

Even the Philippines’ most militant labor union, the Kilusang Mayo Uno (KMU), through its secretary-general Roger Soluta, got in on the action and slammed Aquino for “comparing the leaders of China with Adolf Hitler.”

Instead of organizing the workers in the 30 China-owned mining corporations in the Philippines which are exploiting and sucking up the country’s natural resources and blatantly subverting the country’s labor and environmental laws in the process, the KMU is spending its time defending China and attacking Aquino.

I told my friends that the state-run Xinhua news agency and China’s supporters in the Philippines had distorted Pres. Aquino’s comments. According to the New York Times, Aquino said: “Like Czechoslovakia, the Philippines faces demands to surrender territory piecemeal to a much stronger foreign power and needs more robust foreign support for the rule of international law if it is to resist”. He did not compare “the leaders of China with Adolf Hitler”. He simply compared the appeasement of Hitler in 1938 over the Sudetenland issue with the appeasement of China now.

Aquino’s point, as Inquirer columnist Conrado de Quiros correctly noted, was that “if you don’t stop China from fledgling expansionism now, you won’t be able to stop it from full-blown expansionism later.”

My friends told me they respectfully disagreed with me and agreed with what China’s Foreign Ministry Spokesperson Hong Lei said: “As an unwavering upholder of international justice, China made huge sacrifice and indelible historical contribution to the victory of the World Anti-Fascist War. It is inconceivable and unreasonable to place China-Philippines South China Sea disputes in the same category with the WWII history.”

In other words, they said, China could not possibly be compared to Hitler because China fought fascism during WW II. Besides, how could China be imperialistic when it suffered under imperialism?

But China has placed the whole South China Sea – all 1.4 million square miles of it – under the jurisdiction and control of its Sansha City Prefecture with a powerful People’s Liberation Army (PLA) naval fleet patrolling it and authorized “to board, seize and expel foreign ships” found anywhere in the South China Sea.

China has also placed the entire South China Sea under its Air Defence Identification Zone (ADIZ) which the Philippines denounced as infringing on the freedom of the countries of the world to fly in international airspace, compromising the safety of civil aviation, threatening the national security of all the affected states and transforming the entire air zone of the South China Sea into China’s “domestic airspace.”

It is “inconceivable and unreasonable” to imagine it only because China experienced this same type of imperialist occupation on February 18, 1932 when Japan invaded its territory of Manchuria and proclaimed the state of Manchukuo as the governing body for the occupied region which it had detached from China.

My friends recalled reading my San Francisco op-ed article about this subject where I described China’s annexation of the South China Sea as “the most brazen maritime territorial grab in history.”

But my friends assured me that China does not intend to actually gobble up the Philippines. “We have a long history of friendship. China will not do anything to jeopardize that friendship,” they assured me.

I respectfully disagreed with them and reminded my friends of the old Chinese proverb – “beware of one who speaks with honey in mouth but dagger in heart”.

China wants to seize the Ayungin Reef, the gateway to the Recto Bank, which according to the US Energy Information Agency (EIA), contains 17.7 billion tons or approximately 126 billion barrels of oil worth trillions of dollars along with 25.5 trillion cubic feet of natural gas. China desperately wants this oil to fuel the ever expanding needs of its ever-growing economy. But the Philippines also needs the oil to ensure a prosperous future for the country instead of one dependent on exploited and abused overseas foreign workers. This is what is at stake. This is why Pres. Aquino warned China in his State of the Nation address in July 2011 “If you trample on Recto Bank, it is like you are trampling on Recto Avenue”.

Somehow, our lunch discussion then shifted to Pres. Richard Nixon and the role he played in opening China to the west in 1972. My friends shared that it was actually Chairman Mao Zedong who initiated China’s opening to the US because of its border conflict with the Soviet Union which flared up in violent clashes in 1969. China needed the US as leverage against its more powerful neighbor in the north.

“Bingo! There you go,” I said. The Philippines is simply taking a page from China’s playbook, I told them. It also needs the US as leverage against its more powerful neighbor in the north.

With that, we finished our dessert.