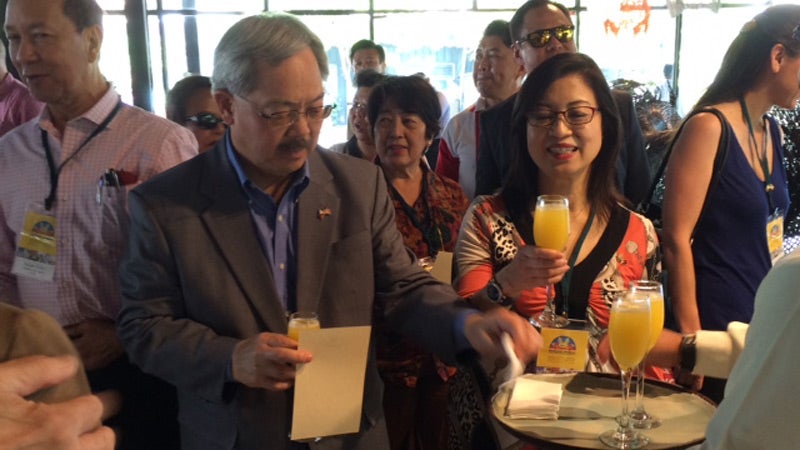 San Francisco Mayor Edwin Lee and his wife, Anita, at the CITEM design center at the start of their San Francisco-Manila sister cities tour.

Manila, which boasts its golden sunset, and San Francisco, which has the famed Golden Gate Bridge, renewed its ties as sister cities Wednesday afternoon at the Manila City Hall.

Manila Mayor Joseph Ejercito Estrada and San Francisco Mayor Edwin Lee exchanged signatures to strengthen the bond of the two cities which was first officially made in 1961.

Lee, who is the first Chinese-American mayor of San Francisco, said that the ties of the two cities go deeper and older than 53 years of paperwork.

“Although our sister city relationship was established over half-a-century ago in 1961, our ties are much deeper and older,” Lee said.

“San Francisco’s Filipino community has without doubt enhanced the city’s status as an international center for culture, trade, commerce and tourism,” he added.

Lee said Manila and San Francisco have similar ideals as both city governments are committed in imrpoving their economies and making sure the fruits of their labor reach every single member of the populace.

The San Francisco mayor also expressed his, and his city’s, condolences for the victims of Super Typhoon Yolanda saying that the pain they endured were the same as if their “next-door neighbors” were hit with the calamity.

As part of the visit, Lee brought with him a team from the San Franciso Deparment of Emergency Management to share practices with Manila in preparation for another disaster.

After the signing of documents, Lee went directly to the Pamantasan ng Lungsod ng Maynila to receive his honorary degree as Doctor of Public Management.

The mayor, who has worked for 20 years at the San Francisco City Hall, said that he was a “radical” during his younger years.

“We raised our voices against the decisions for war, be it Vietnam or Afghanistan,” the graduate student from the University of California at Berkeley. “We tried to make the world a better place, we were young and ready to change the world”