No Sabah talk when Aquino visits Malaysia this month 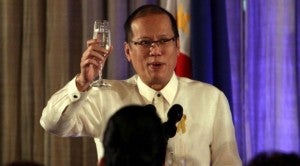 MANILA, Philippines – President Benigno Aquino III won’t be discussing the country’s claim on Sabah when he visits Malaysia by the end of the month. Instead, he will discuss peace, trade and commerce.

“Sabah was not part of the agenda,” Aquino said Wednesday after his inspection of the Estero de San Miguel project in Manila.

However, Aquino said he would also ask about the situation of Filipinos arrested for their involvement in the Sabah standoff.

Aquino said he has yet to receive proof of human rights abuses allegedly perpetrated by Malaysian forces against Filipinos.

(What is clear to me is the ongoing deportation of Filipinos without work permits.)

The President said around 140 to 150 Filipinos were included in the last group that was deported, far from what was earlier feared as massive deportation of thousands of Filipinos living in Sabah.