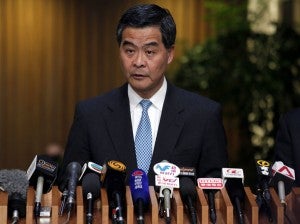 MANILA, Philippines – Hong Kong chief executive Leung Chun-ying is asking the government to apologize for its mistakes during the infamous Manila hostage taking incident that killed eight people in 2010.

But Malacañang is steadfast in its stand not to give one.

Communications Secretary Herminio Coloma during a Palace press briefing on Tuesday said he government “is doing everything it can and everything necessary to solve the issue.”

Asked if President Benigno Aquino III will finally give his apology to the families of the victims, Coloma merely said the government is trying its best to understand what Hong Kong wants from the Philippines and that there are already “alternative proposals” suggested to them.

The South China Morning Post on Tuesday quoted Leung’s call for the Philippine government to “show more sincerity to solve the incident in order to avoid further sanctions.