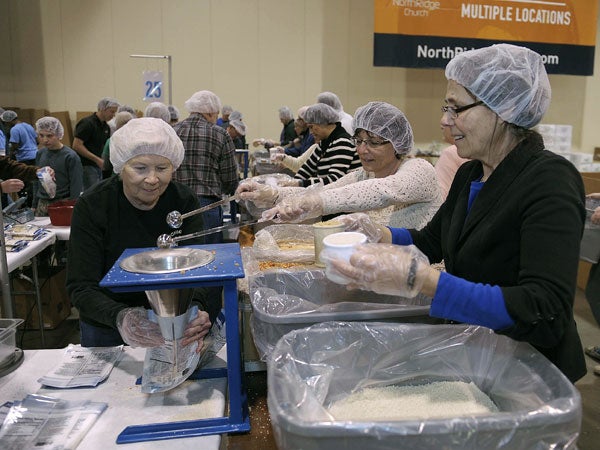 In this Feb. 14, 2014 photo, from left to right, Judy Deckert, Luisa Solak and Jan Bartee, all members of NorthRidge Church, pack whole grain rice, as volunteers pack food for the malnourished during the 2 Million Meals event, in Novi, Mich. More than 8,000 people helped pack 2 million-plus meals, which will be shipped to El Salvador, Haiti and the Philippines. AP

The 2 Million Meals effort, the brainchild of a Detroit-area pastor, concluded Sunday.

The results: 8,810 volunteers put together 2,029,536 meals to be shipped to El Salvador, Haiti and the Philippines. The mixtures of rice, soy, dehydrated vegetables and 21 vitamins and minerals will provide one meal a day for a year to 5,560 children.

“The truth is, this has been an amazing experience because of the impact it’s going to cause in the lives of every child and every person who’s going to eat these meals,” Brad Powell, who heads up NorthRidge Church, said shortly after the 2 millionth meal was packed Sunday afternoon. “But I think you can see from the energy in this room and all that’s going on it’s going to change more than just the lives of those who will eat this food.”

Powell led an effort three years ago in which 5,000 volunteers packed 1 million meals over the same time period at an area middle school. Convinced more could and should be done, Powell dreamed of doubling that effort.

That vision became a reality on Sunday, when the magic completed number was displayed on an oversized video display. Volunteers, who worked 11 sets of two-hour shifts from Friday to Sunday, cheered and danced as Gary Glitter’s sports-arena anthem “Rock & Roll, Part 2” filled the Suburban Collection Showplace, a convention center in Novi, which donated 65,000 square feet (6,000 sq. meters) of space.

Also on board was Feed My Starving Children, a Minnesota nonprofit that sends volunteer-packed meals across the globe.

NorthRidge members paid for the meals themselves, raising $440,000 mostly through Christmas offerings at the church, which is one of the largest in the US. The nondenominational Christian church, which has its main campus in Plymouth Township as well as two satellite locations elsewhere in Michigan, draws an average of 9,600 worshippers each weekend.

Packing stations such as Jenna’s cheered when they reached a certain number of meals. The hooting and hollering could be heard, barely, over the nonstop barrage of music—an eclectic mix of Christian rock, Motown, modern pop and more.

On Sunday, the volunteers dropped their tape, scissors, labels and ladles and broke into the “Cupid Shuffle” dance en masse.

Gabe Solak, a 12-year-old from Ypsilanti, said he was drawn by the chance to do something for someone else.

“I heard about all these kids who were starving and are hungry, and I wanted to help them,” he said. “I’m very compassionate.”

Sgt. Stacy Price, 43, worked alongside a handful of his fellow soldiers from a nearby Army National Guard unit, which saw 2 Million Meals as both a chance to give back as well as a valuable team-building exercise.

Price, though, said it was simply an enjoyable experience.

“I got to meet some amazing people here. Hopefully, I’ve met some more friends,” said the fatigues-clad Price, who posed for more than a few pictures with other volunteers. “The experience was great. The people were very upbeat. Everyone was smiling and having a good time.”—Mike Householder