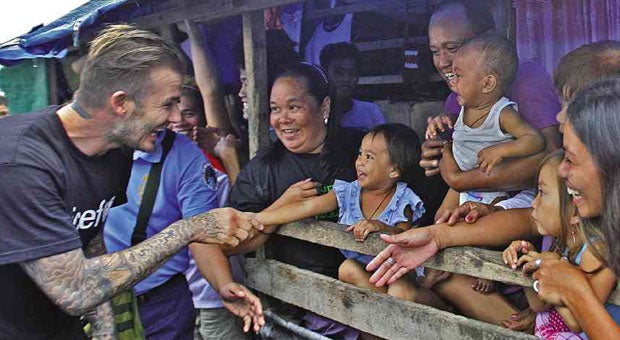 BECKHAM IN TACLOBAN Football superstar David Beckham visits children living at the Tacloban City Convention Center tent city who have been displaced by Super Typhoon “Yolanda.” The English footballer is an ambassador of goodwill for the United Nations Children’s Fund. RAFFY LERMA

The two-day visit of football star and United Nations Children’s Fund (Unicef) goodwill ambassador David Beckham to the disaster-hit areas of the Eastern Visayas this week kickstarted the UN campaign to bring sustained international support for some 14 million people affected by Supertyphoon “Yolanda” three months ago.

As the British star athlete made his visit to the disaster zone on Thursday, Swiss filmmaker Michael Steiner began filming his documentary on survivors of the supertyphoon for release on March 4 at the UN Development Programme’s (UNDP) 11th Match Against Poverty.

To be held in Bern, Switzerland, the annual charity event will donate two-thirds of its revenues from ticket sales and television rights to “help communities affected by the biggest storm ever recorded globally to rebuild their lives,” the UNDP said in a statement yesterday.

During the match, UNDP goodwill ambassadors Zinédine Zidane, the French football legend, and the Brazilian retired footballer Ronaldo will lead their team of top footballers in a friendly match against the Bern professional football club, the BSC Young Boys and Friends.

“Many of the people here were already living in extreme poverty, reliant on subsistence agriculture or fisheries. We must help them restore their lives quickly,” said Maurice DeWulf, the UNDP country director for the Philippines in a statement.

Steiner, currently among Switzerland’s top directors, volunteered to put together a documentary that hopes to “tell the story of recovery in the Visayas through the plight of local football players,” including those who have taken part in the UNDP’s cash-for-work schemes, the UNDP said.

“People here are determined to fight their way back after this disaster. But they can’t do it alone. Through this documentary, we want to shine a spotlight on the urgent need for recovery support,” said DeWulf.

Among 14 UN agencies supporting post-Yolanda recovery efforts in the Visayas, the UNDP is currently implementing a three-year $65-million recovery program for Yolanda-affected areas, which “outlines critical recovery interventions needed to support the Philippines to bridge from early recovery to rehabilitation while creating conditions for resilience-building and long-term recovery.”

The UNDP said some 25,000 people have earned cash from the emergency employment scheme, while clearing remaining debris in their villages.

The agency is seeking sustained global support as other livelihood initiatives, including the recycling of debris such as felled coconut trees, remain “severely under-funded.”