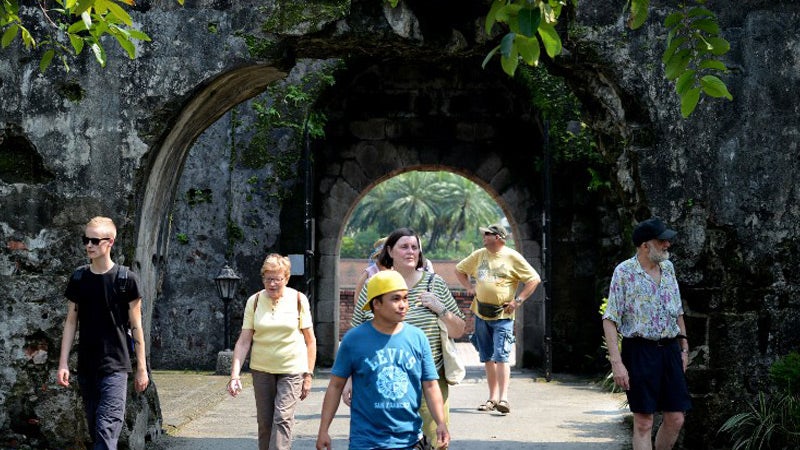 Foreign tourists visit Fort Santiago in Manila on Oct. 22, 2013. Despite the series of calamities that struck last year, the Philippines registered a 9.56 percent growth in foreign arrivals in 2013, the Department of Tourism said Thursday, Feb. 13, 2014. AFP PHOTO / NOEL CELIS

MANILA, Philippines—Despite the series of calamities that struck last year, the Philippines registered a 9.56 percent growth in foreign arrivals in 2013.

But the figure was below the nation’s target of five million arrivals for the year.

This was likely to due to the powerful earthquake, which killed more than 220 people and damaged facilities and roads in the popular tourist islands of Cebu and Bohol in October, and the destruction caused by Super Typhoon Yolanda (international name: Haiyan) in November, Tourism Department spokesman Benito Bengzon said.

The typhoon left 8,000 dead or missing and devastated many popular tourist spots in the central islands.

“There were a lot of calamities that hit us last year and there were some cancellations,” Bengzon told AFP.

The DOT nevertheless said last year’s performance “marked a new milestone for the tourism industry” as visitor arrivals demonstrated sustained growth despite the challenges of the previous year.

The highest growth rates during the year were recorded in February (15.8 percent), June (14 percent) and August (13 percent).

Visitor count reached an all-time high of more than 400,000 during the months of January, February, March, July and December.

“Our key source markets generally performed well during the month of December, proof that international confidence has been regained. The Philippines is profoundly grateful for the outpouring of support, aid and goodwill from all over the world. They were all instrumental in our road to recovery,” Tourism Secretary Ramon R. Jimenez Jr. said in a statement.

Koreans remain the biggest source market with a 24.9 percent share in the total inbound visitors, or equal to 1.17 million arrivals. The number rose by 13 percent by yearend.

Jimenez said the new air services agreement signed by the Philippines and South Korea has led to an increase in flight frequencies in the country’s key international gateways.

The Chinese tourist market bounced back with the highest yearend growth rate of 69.9 percent, or a total visitor count of 426,352. The substantial increase in Chinese visitors was first felt in May 2013 when arrivals posted a 107.7 percent growth.

The tourism chief attributed this growth to the opening of new regular and chartered air services and increase in cruise itineraries that supported aggressive marketing activities held in key cities of China.

The number of Japanese visitors, on the other hand, continued to rise steadily with 433,705 arrivals, or a 5.1 percent growth from the previous year. The implementation of new programs and new products targeted at new and niche markets has helped revitalize growth in this market.

By regional grouping, East Asia contributed the biggest arrivals for a share of 49.1 percent with 2.3 million.

The Asean region maintained its position as the third-largest contributor of arrivals, accounting for 9.02 percent of the overall traffic base.

Overall average length of stay of visitors remained at 9.6 nights. Visitors from the United States had the longest stay at 13.4 nights.

Koreans showed the biggest tourism spend at $140.81 per day.

This year, Jimenez sees brighter prospects for the tourism sector.

This figure has been revised from an earlier target of 6.8 million for this year.

The earthquake and typhoon destroyed tourism infrastructure and popular attractions like historic churches, hotels, resorts and diving and surfing sites.

Jimenez said this year exerts extra pressure on all the sectors, public and private, to prepare for the DOT’s campaign Visit the Philippines Year (VPY) 2015, which will feature a calendar of events and “an exciting mix of activities.”—With a report from Agence France-Presse

Philippines to miss tourism targets due to disasters