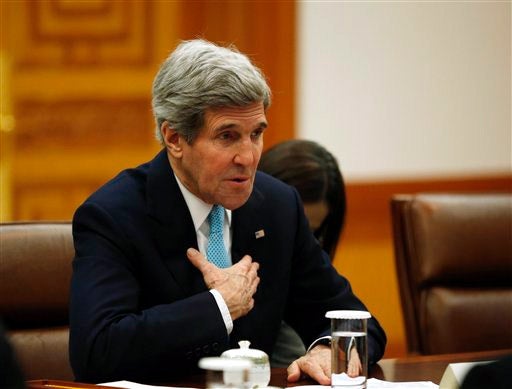 U.S. Secretary of State John Kerry talks with South Korean President Park Geun-hye during their meeting at the Blue House in Seoul Thursday, Feb. 13, 2014. Kerry arrived in Asia on Thursday on a mission aimed largely at easing tensions between China and its smaller neighbors over territorial disputes and exploring ways to restart long-stalled talks on ridding North Korea of nuclear weapons. AP

SEOUL, South Korea — U.S. Secretary of State John Kerry arrived in Asia on Thursday on a mission aimed largely at easing tensions between China and its smaller neighbors over territorial disputes and exploring ways to restart long-stalled talks on ridding North Korea of nuclear weapons.

On his fifth trip to Asia as America’s top diplomat, Kerry will be visiting South Korea, China and Indonesia, where officials traveling with him said he will be making the case for reducing regional acrimony over competing claims in the East and South China seas. At his first stop in Seoul, Kerry will also be expressing deep concern about a recent spike in tensions between U.S. allies South Korea and Japan, the officials said. Japan is not on Kerry’s itinerary, but Kerry made the same point with Japan’s foreign minister last week in Washington, the officials noted.

Tensions between Seoul and Tokyo “serve nobody’s interests,” one senior official told reporters aboard Kerry’s plane. The officials spoke on condition of anonymity because they were not authorized to discuss the issues publicly.

South Korea was angry over a recent visit by Japan’s prime minister to a controversial war shrine in Tokyo, which has deepened resentment in both of the neighboring countries over Japan’s colonial past and abuses committed during World War II. Japan says it is willing to hold high-level dialogue to ease tension, but there appears to be little immediate prospect of that happening.

Kerry arrived in Seoul a day after senior North and South Korean officials held their highest-level talks in years, but as the North continues to complain about upcoming U.S.-South Korean military exercises. North Korea has cited those military exercises as a reason to rescind an invitation to a U.S. diplomat to visit the country to discuss the case of jailed American missionary Kenneth Bae and suggested they may cancel planned upcoming reunions between families separated by the Korean War. The rival Koreas agreed Thursday to hold another round of talks Friday.

“Last April you visited Korea amid high tensions,” Park said. “This year you come also at a very critical time, and I’m sure your visit will serve as an occasion for moving our relationship forward as well.”

From South Korea, Kerry will be seeking details of the inter-Korean talks, thoughts on how to improve relations with Japan and ways to accelerate cooperation between Washington, Beijing, Seoul and Tokyo on bringing North Korea back to the nuclear negotiating table, the officials said.

Kerry will bring a similar message on North Korea to senior Chinese officials when he visits Beijing on Friday, the officials said. The goal, the U.S. officials said, is to get China to use its influence with its ally North Korea to turn the word “denuclearization” from a noun to a verb. The officials said Kerry wants to make a resumption in the so-called six-party talks on North Korea a priority but stressed that Pyongyang’s interest in that remains unclear, particularly in the wake of a recent purge in the North’s top leadership.

But to get back to talks, the officials said North Korea would have to be ready to make significant concessions.

“The days are long gone when the international community will take North Korea’s IOU,” one official said.

Of potentially greater immediate concern, Kerry will implore Chinese authorities to end and roll back a series of increasingly assertive steps in the East and South China seas, the officials said.

“It is unwise in the extreme for China to take actions that are destructive of stability on the region,” said one official traveling with Kerry.

U.S. diplomats have cited a litany of actions that China has taken recently that affect what they say is American national interest in freedom of navigation and maritime safety in the resource-rich waters of the South China Sea that are dotted with reefs and islands subject to multiple disputes involving China, the Philippines, Vietnam, Malaysia, Brunei and Taiwan. Those have included restricting access to a contested reef and imposing fishing regulations in disputed waters. The U.S. has also warned China that it should not declare an Air Defense Identification Zone, or ADIZ, over any part of the South China Sea.

A declared Chinese ADIZ over contested areas in the East China Sea has already drawn harsh criticism from the U.S. and its allies.

The U.S. has been urging China and the Association of South East Asian Nations to agree to a binding code of conduct for behavior in the South China Sea for years.

China has been reluctant to negotiate with ASEAN as a whole, preferring to deal with nations bilaterally and has fiercely rejected U.S. allegations that it is using vague territorial claims to gradually assert control over the disputed areas. On Saturday, China’s foreign ministry said in a statement that some U.S. officials’ remarks were not constructive and opined that “playing up tensions” was not conducive to maintaining peace and stability.

After Beijing, Kerry will raise the code of conduct issue again in Indonesia when he meets with the ASEAN secretary general at the bloc’s headquarters in Jakarta.

Also, in Indonesia, Kerry plans to deliver a speech highlighting the importance of dealing with climate change, the officials said.

Although some have criticized the administration for ignoring it’s touted “pivot to Asia,” officials pointed to the White House’s announcement that Obama would soon visit Japan, South Korea, Malaysia and the Philippines as Kerry visited the continent.

After the Indonesia stop, Kerry will fly on to the United Arab Emirates before returning home.