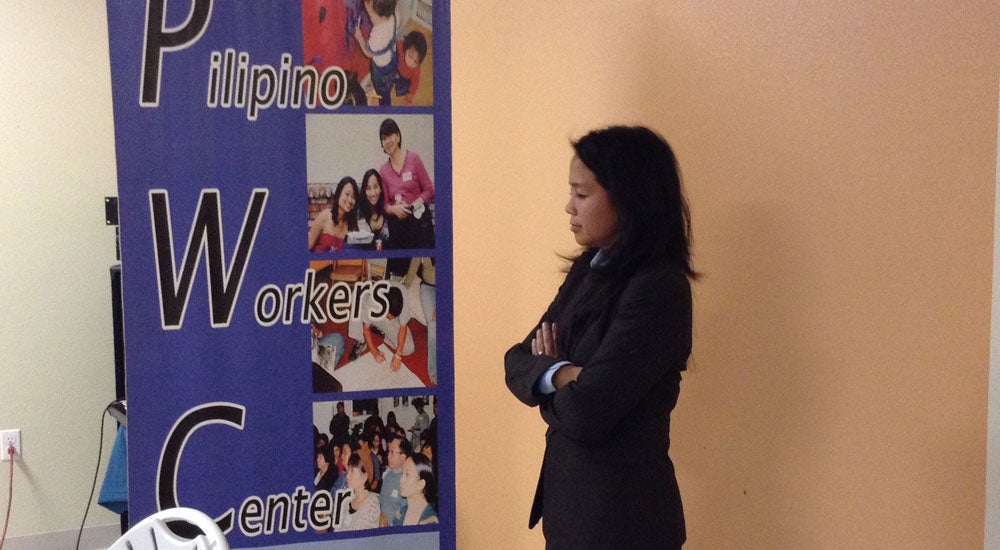 LOS ANGELES—Malou Villacisneros postponed her weekend social plan this Friday evening to come to the Pilipino Workers’ Center, housed at the newly dedicated Larry Itliong Village at the heart of Historic Filipino Town. She joined some 60 community folks gathered at the PWC on an unusually cold Southern Cali evening sending texts and voice mail messages to John Kerry, Secretary of State Department and other political offices to support the passage of the Temporary Protected Status (TPS) for the Philippines.

Around her were Filipinos of various ages, doing the same texting and calling and the hall was buzzing with action, reminiscent of “get the vote out” scenes on any election night.  It sure was a community in action. It was also a setting that could de-bunk the myth of an affluent “model minority“ for this immigrant group.

Composed of 600 worker members mostly domestic and care givers from California, PWC has taken an active role in the TPS campaign nationally because it recognizes that the undocumented immigrants have often been exploited in the work places.

“PWC acknowledges there is a growing number among Filipino expatriates who are undocumented and as such, this group engages in advocacy for humane immigration reform, said Aquilina Soriano Versoza, PWC Director.

Our programs and services also meet the daily needs of those in our community without immigration status and those who are low income and struggling to meet health and safety needs.  We see that often immigration status correlates with worker exploitation.” 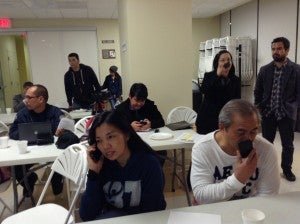 Versoza says there is an estimated  200,000 to 300,000 undocumented Filipinos in the US and a big concentration is in California, owing to its huge immigrant population from the Philippines.

This is the reason why PWC is centrally engaged in the TPS campaign.

It is important, Versoza explained, that mainstream communities understand that some Filipinos have become undocumented many different ways.  Some have come over on a working visa then stranded here. Some have over-stayed to try to help their families back in the Philippines.  Some have been trafficking victims.

A few of the common issues of undocumented are being exploited by employers, not being able to drive (although this will change with the new drivers’ license bill), and becoming victims of immigration practitioners (both authorized and unauthorized) by false promises.

Versoza states that “right now, many Filipinos who are undocumented would like to become documented, but the immigration laws are such that there is no path to citizenship. Filipinos also face some of the longest waiting times before being able to come to the US even after their family petitions are approved. We are also not eligible for visa lottery.”

She continued that “the only way to get a Social Security with work authorization is by being able to adjust immigration status.  The only other hope for this beyond immigration reform is the granting of Temporary Protected Status for the Philippines. Once a country receives TPS designation, nationals of that country (like the Philippines) residing in the US receive a temporary, humanitarian form of relief from deportation.

The PWC has become a hub of activities since it relocated last year to its new building, which is central to historic  Filipino Town (Beverly blvd. and Glendale), says Office Coordinator Marie Hernandez. She said the center serves over 2000 clients every year” through all of our different programs.”

The list of its community programs is a dynamic iteration of needs: Healthy Historic Filipino town (Healthy HiFi) Program including the Community Food Pantry, “serving over 500 individuals monthly.”

The center has a  HiFi Paluwagan (peer lending circles) program, which caters to those needing quick loans to process their immigration status, among others.  “We have served over 50 clients over this past year.  There is an operating credit loans under its projects such as   Lending Circles for Citizenship, Lending Circles for Dreamers and Security Deposit Lending Program,” added Versoza.

One of the center’s major achievements is the establishment of a 48-unit apartment housing at the same facility. “PWC was able to move over 100 individuals into affordable and low-cost housing in this new housing development, Larry Itliong Village, supported by grants and local funding,” said Versoza.

It has also catered to low and middle income families and individual seeking help in preparing their taxes.

The center’s leadership in the communities of LA is slowly but surely recognized in and around advocates’ circle in the city. Established in Los Angeles in 1998, PWC takes pride that one of its members and caregivers stood next to President Obama when he announced in September 2013 that the Department of Labor would start the process of including protection for the domestic sector such as overtime and other labor standards.

The PWC Director stated that “we were one of the leading organizations of the California Domestic Workers Coalition;   we were able to win overtime rights for all domestic workers including caregivers/personal attendants, in California. We have brought together Filipino workers to tell their stories and to fight for their own rights and dignity.”

She added: “Domestic Workers were the last group in California not to have the right to overtime.  It is time that we value the important work that these workers do.”

On a national level, Pilipino Workers Center is one of the anchor groups of the National Domestic Workers Alliance. Versoza said PWC also won inclusion for personal attendants into labor law protection this past August 2013.

Versoza, who comes from UCLA Asian American Studies, evaluates that their most vibrant projects are “our programs and campaigns for domestic workers, primarily for caregivers/homecare workers.” She believes in the philosophy of providing a safety net to the disadvantaged by sharing with them the tools for self-sufficiency.

“We are currently launching worker-owned cooperative homecare agencies to provide better working conditions than many other agencies,” Versoza explained.  It’s quite early to assess the results, but she committed to providing a community report.

“PWC provides education and trainings for workers about their rights, fights for back-wages and develops collective programs to bring them together to address their own needs. Everyone has talents, skills and experience to bring to the table.  PWC’s model is not charity, but changed created by the community itself.”