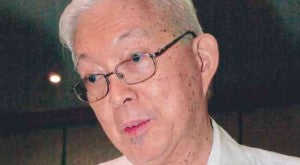 Retired Archbishop Gaudencio Cardinal Rosales (shown in this file photo) led the celebration of the World Day of the Sick in Manila with a Mass at the Espiritu Santo church in Sta. Cruz, where he anointed a number of sick parishioners.

MANILA, Philippines—Catholic churches all over the country celebrated on Tuesday the annual World Day of the Sick, which this year had for its theme, “Faith and Charity,” according to the Catholic Bishops Conference of the Philippines (CBCP).

In Manila, retired Archbishop Gaudencio Cardinal Rosales led the celebration with a Mass at the Espiritu Santo church in Sta. Cruz, where he anointed a number of sick parishioners.

In a news release, the CBCP said free medical consultations and psycho-spiritual counseling would be conducted in churches nationwide.

The World Day of the Sick, initiated in 1992 by Pope John Paul II in memory of Our Lady of Lourdes, is commemorated each year to “encourage the faithful to pray for those who suffer from illness, as well as their caregivers.”

Earlier in a message, Pope Francis said: “We, too, must give our lives for the brethren.”

“The Church recognizes in you, the sick, a special presence of the suffering Christ. At the side and indeed within our suffering is the suffering of Christ. He bears its burden with us and He reveals its meaning,” he said.—Jerry E. Esplanada