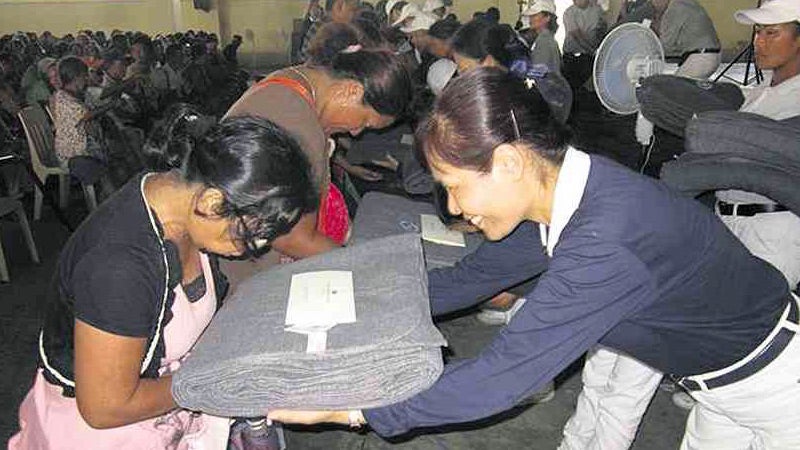 LOVE MISSION. Volunteers of the Tzu Chi Foundation hand over relief items to typhoon survivors in Tacloban City. The group has so far helped more than 28,000 city residents. CONTIBUTED PHOTO

Beyond just rebuilding villages destroyed by Super Typhoon Yolanda, one organization has been helping survivors heal from within, repairing the deep wounds of grief and loss by living up to its name: Tzu Chi, Chinese for “compassionate relief.”

The Tzu Chi Foundation, an international humanitarian nonprofit group established in Taiwan in 1966, has been quietly working on the ground across devastated Leyte, on a mission to revive a “circulation of love” in places that hope may have momentarily abandoned.

Led by its Philippine branch, Tzu Chi, an organization that commands a 10-million strong membership across 47 countries, has brought relief to some 60,000 families across the disaster zone, initiating cash-for-work programs in the worst-hit villages and installing prefabricated schools and houses for the displaced.

In the words of its founder, globally renowned Buddhist nun and Ramon Magsaysay laureate Dharma Master Cheng Yen, Tzu Chi’s work is one of giving survivors the confidence that they could begin again: That is, to “uplift their body and spirit with love and motivate them to take action to rebuild their own lives.”

“Our philosophy is that the suffering of others is like our own suffering. That is the teaching of our founder. When we help others, we must do it with a pure heart, and we must give without expecting anything in return and at the same time be thankful that we are given the opportunity to serve,” said Alfredo Li, Tzu Chi Philippines president.

The businessman, one “used to staying in five-star hotels,” had spent 34 days on Ground Zero as he led Tzu Chi’s operations. No complaining from Li, but sleeping on floors of damaged classrooms or what was left of a resort in Tacloban City, foregoing showers and meals, was truly a humbling experience for him.

“Before I joined Tzu Chi, my thinking was that I am the giver, so I have a higher standing than the beneficiaries. Then I came to Tzu Chi, the teaching was so different: That we should be the ones thankful, because they give us the opportunity to do good. It shifts the paradigm,” Li told the Inquirer.

“We had no right to complain. We have only one mission—to alleviate the sufferings of the people. So with that shift in paradigm, when we go to Ground Zero and meet with the victims, we have that respect in our hearts. So our attitude is to always put a smile on our face, we always bow, we always respect them,” he said by phone on Thursday.

Far from the glare of media cameras, the foundation, described by Time magazine in 2011 as being “known for the astonishing speed and efficiency with which it brings aid to victims of natural disasters,” has so far brought some P1.2 billion in aid to hard-hit villages in Leyte, Li said.

He said the amount was pooled together from donations collected from Tzu Chi branches around the world, from the United States and Indonesia to Cambodia and Honduras.

Tzu Chi volunteers also flew in on their own account from around the world—Taiwan, the United States, Malaysia, Indonesia and Hong Kong—and logged some 7,000 man-days of work on the ground. There were simply too many who came for Li to remember the exact count.

The roster of volunteers also included members from Marikina City—themselves survivors paying it forward after becoming recipients of Tzu Chi’s aid after the devastation wrought by Tropical Storm “Ondoy” in 2009.

The post-Yolanda response has been the largest Philippine operation for Tzu Chi, the world’s largest Buddhist charity that conducted extensive relief and early recovery operations in quake-hit Haiti and in Japan, following the 2011 earthquake and tsunami.

“All volunteers paid for their own hotels, plane fare. So all donations are sure to reach the beneficiaries, and we directly give it. We can’t give it through other organizations or agencies. [The assistance] should go from our hands directly to the beneficiaries,” Li said.

A major part of Tzu Chi’s mission in Leyte was the 19-day cash-for-work program held in some 60 barangays (villages) in Tacloban, a debris-clearing scheme similar to that implemented by the United Nations and the government to bring much-needed employment to survivors, albeit temporarily.

From some 610 participants when it began last Nov. 20, the program mobilized up to 34,000 survivors daily in cleaning up their villages until Dec. 8. Each earned P500 a day—an amount that workers used to buy food for their families, revitalizing the local economy.

In all, Tzu Chi distributed P150 million in the cash-for-work program.

“If you are just sitting there, your mind just dwells on negativity. But when you start cleaning your own place, especially when you get thousands and thousands of people, there is strength. There is strength in unity,” Li said.

Working with local officials to identify beneficiaries, the organization also provided shelter assistance to nearly 56,000 families, distributing aid amounting to P8,000, P12,000 or P15,000, depending on their needs.

After this first phase, Tzu Chi began the next step in its long-term mission in Leyte: providing temporary shelter for the displaced and prefabricated classrooms for schools that lost much of their infrastructure.

It has so far built some 263 classrooms for various schools that lost facilities, plus 12 on the University of the Philippines campus in Tacloban.

Tzu Chi is also identifying sites for the construction of transitional shelter in Tacloban, Palo town and Ormoc City, with the goal of building up to 5,000 units. It aims to build similar facilities in conflict-stricken Zamboanga City and quake-hit Bohol.

It was not all work, though, as Tzu Chi made sure that survivors also had time to share their experiences among themselves—a vital step toward healing.

“We don’t just tell them ‘OK, you work and we pay you.’ We are with them. Before we start working, we have about one hour of sharing. We don’t talk about politics or religion, we don’t convert them to our religion. All we do is spread the seeds of love. From there, we share beautiful stories,” Li said.

Tzu Chi encouraged the workers to “be part of the cycle of goodness” by helping each other out.

It was a lesson that Leyte Provincial Hospital’s resident physician, Dr. Rufina Bato, among those who lost loved ones to the typhoon, took to heart: that it is in the time of terrible loss that people should, more than ever, be there for one another.

“Even though we are in a disaster area, we still should do something to help. I am tearful actually. It moves me that people are helping us although we don’t know them (volunteers from around the world),” Bato was quoted by Tzu Chi as saying in a statement.

For Florentina Meneses, among recipients of its shelter assistance, the Tzu Chi program was a blessing that helped her finally surrender her woes to higher power. She had lost her sister in the disaster.

“Through the program, I lightened up. I have been keeping a heavy feeling since then [the typhoon]. But I have come to realize that there really comes a time when we have to let go and let God take over,” she said.

They were among nearly 40,000 people who gathered on Jan. 19 at Leyte Grandstand for a thanksgiving program with Tzu Chi, all unmindful of persistent rains and mud puddles. The turnout, many carrying letters and improvised banners of thanks, proved to be an overwhelming expression of gratitude for volunteers.

“From the time we went there, we saw in their faces that there was no hope, there’s no glow in their eyes. Until we started cash-for-work, we saw that they were more energetic, that there was a smile on their face. That keeps us going. We draw strength from the people and also that sense of responsibility that we are given the opportunity to be able to make a difference. That keeps us going,” Li said.

Tacloban rising from the rubble