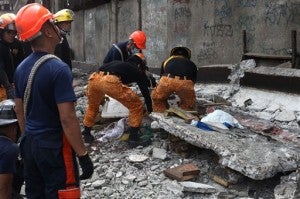 Rescuers shift through the rubble to recover an unidentified man at a fish port in Pasil, Cebu, central Philippines on Tuesday Oct. 15, 2013. A 7.2-magnitude earthquake collapsed buildings, cracked roads and toppled the bell tower of the Philippines’ oldest church Tuesday morning, killing at least 20 people across the central region. AP Photo

MANILA, Philippines—The United Nations humanitarian agency has renewed its call for donor support in quake-devastated Bohol and nearby provinces as it noted urgent shelter needs for more than 360,000 displaced people in Central Visayas.

In a statement on Friday, the UN Office for the Coordination of Humanitarian Affairs (Ocha) appealed to donors to fill the $19-million (P885 million) funding gap in the $33.8-million revised Bohol action plan, which seeks to address the remaining humanitarian needs in the disaster zone until April.

International donors had earlier contributed a total $15.1 million (P680 million) to the six-month plan (October to April), which lays down the United Nations’ early recovery programs in affected areas.

The revised plan released on Friday reduced the United Nations’ funding request from the original $46.8-million (P2.1 billion) plan following assessment and consultation with government and stakeholders as humanitarian work on the ground has already shifted to the recovery phase, Ocha said.

Luiza Carvalho, United Nations’ resident humanitarian coordinator in the Philippines, cited how the United Nations continued to do parallel work in quake-hit provinces even while donor priority shifted to providing relief to more than 14 million people affected by Supertyphoon “Yolanda” (international name: “Haiyan”) barely a month after the Bohol disaster.

“The Philippines authorities and humanitarian partners have contended with a series of disasters, including Supertyphoon Haiyan, since the 7.2-magnitude earthquake hit Bohol on Oct. 15 last year. We are continuing to support the authorities’ efforts on many fronts and will not forget the plight of people affected in Bohol,” said Carvalho.

“Although Typhoon Haiyan did not cause significant damage on Bohol, it had a strong impact on the response, as many government and international humanitarian resources were moved from Bohol to address needs caused by Haiyan,” Ocha said separately in its revised action plan.

The 7.2-magnitude Bohol quake displaced some 367,580 people across Central Visayas as it either damaged or destroyed some 79,217 houses and 4,617 schools.

Providing shelter to those who lost their homes and removing them from unsafe living conditions is now top priority, said the United Nations, as it noted how aftershocks were “still common” in quake-hit areas.

“People move frequently between their damaged homes and tents—depending on aftershocks and weather events. Landslides and aftershocks push them out of the house and into the tents, while flooding and heavy rains drive them back into unsafe homes,” said Ocha in its revised action plan.

“As aftershocks are still common, support for durable shelter solutions is urgently needed to help people get out of these unsafe conditions,” the humanitarian agency said.

The world body is also hoping to rebuild schools, with classes still being held in some 839 makeshift classrooms.