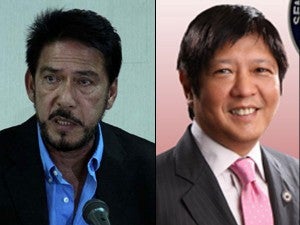 MANILA, Philippines—Senators Vicente Sotto III and Ferdinand Marcos Jr. on Wednesday urged the government to apologize over the bungling of a   hostage rescue that left eight Hong Kong tourists dead in Manila more than three years ago as Hong Kong began enforcing Wednesday a ban on 14-day-visa-free visits by Filipino officials.

The two senators noted that the Hong Kong government had warned of more sanctions if Manila continued to refuse to apologize for the deaths of the tourists.

In an interview with The New York Times on Tuesday, President Aquino said he had no plans to apologize.

Doing so “could create a legal liability,” Aquino said, noting that China had not paid compensation to the families of Filipinos who have died in violent episodes in China.

Communications Secretary Herminio Coloma said Aquino mentioned the case of Dr. Lina Bunye, who was killed with four others, in what was said to be a car bombing at the heavily guarded Tiananmen Square in Beijing last October.

“Then a few years ago… it did not happen during the current administration… there was a father and a daughter who were killed when a knife-wielding man attacked them also in Tiananmen Square,” Coloma said.

“So these are parallel incidents to the act that was perpetrated by the police officer in the Quirino Grandstand incident, and that was the reply of the President, that there was no apology,” he said.

“There was no liability that was acknowledged for these episodes,” Coloma added.

But Sotto said he had consulted international law experts and was told that the Philippines would not incur legal liability if it apologized.

“Is it right to have too much pride? That’s wrong,” Sotto said. “Pride is the head of Satan, humility is his headache.”

Marcos said the government should not give too much meaning to having to say “sorry.”

“It doesn’t mean that we are admitting to any kind of liability,” he said. “It is just an acknowledgment of the fact that there is a terrible tragedy that happened in the Philippines against Hong Kong nationals.”

Marcos said it was not too late for the government to reconsider and apologize, as Hong Kong appeared to be “still open.”

“In fact, if you will look at what they did, they didn’t say there would be no visa-free privilege for all,” he said.

“They just chose the officials because, as they said, the officials were the ones they expected an apology from, not from ordinary Filipinos. So you can see that it’s a very measured [response],” he added.

The DFA, however, was firm that the government should not apologize for the fault of one man.

“We have done everything possible to resolve the issue and reach agreement. It will be unfortunate if the victims and their families will not be able to accept more generous gestures of solidarity from the Filipino people,” said DFA spokesperson Raul Hernandez.

“If Hong Kong will signify acceptance of such gestures, the Philippines is willing to convey these gestures for the benefit of the affected families as soon as possible,” Hernandez said.

He said the government had already prosecuted those who should be held accountable for lapses in the rescue attempt, dealt with the tourist protection that Hong Kong had demanded, and heeded the demand for financial assistance to the families of the victims.

The hostage-taker, Senior Insp. Rolando Mendoza, was shot dead by policemen before he could shoot other hostages on the tourist bus that he had seized.

Hernandez said the Philippines had worked for a “substantive closure” to the tragedy.

Almendras, who left the country amid frenzied response to the devastation caused by Supertyphoon “Yolanda” in the Visayas, also handed over additional financial assistance to one of the hostages who needed surgery.