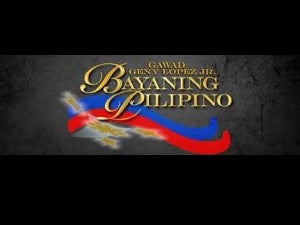 Nominees are organizations that have made a difference “in serving Filipinos in the U.S., Canada or the Philippines, through community-building, emergency relief, promoting culture and tradition, charity outreach, education, youth building, providing skills and employment opportunities, poverty alleviation, infrastructure and food relief,” the TFC announcement stated.

Organizations that make it to the finals will be part of the televised award ceremony in April 2014 in San Francisco, which will coincide with grand TFC’s 20th Anniversary Gala Presentation.

Nominations must be submitted on or before Feb.15, 2014, Saturday. For criteria and more information, visit http://www.tfc-usa.com/globalbayaningpilipino/

Gawad Geny Lopez Jr Bayaning Pilipino Awards North America is mounted and produced by ABS-CBN International.  Selection and judgment of finalists and winners is done through its partner UGAT Foundation in the Philippines.