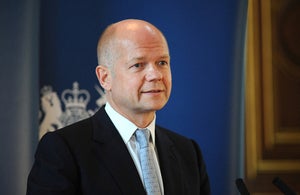 MANILA, Philippines—United Kingdom’s foreign secretary thinks the Philippines can be “one of Asia Pacific’s great success stories” citing the strong economy and the hard work of Filipinos both in the country and all over the world.

“Your high rates of economic growth are a testament to strong economic policy and the hard work of Filipinos at home and abroad, including thousands in my own country,” William Hague, UK Secretary of State for Foreign and Commonwealth Affairs, said in his speech Thursday.

“The Philippines clearly has the potential to be one of Asia Pacific’s great success stories and we want to support you in that, to the benefit of both our peoples,” he said.

Hague highlighted the newly established direct flights between London and Manila that will boost tourism for both UK and the Philippines and the increase of scholars from the Philippines that will be able to study in universities in the UK.

“Secretary Hague and I reviewed our countries’ economic relations. British investments in the country increased by an impressive 293 percent from P1.72 billion in 2011 to P6.76 billion in 2012, making UK a major source of foreign direct investments,” del Rosario said in a joint press conference after their bilateral talks.

“Similarly, our bilateral trade performed positively, and increased by 35 percent from US$ 687 million in 2011 to US$ 927 million in 2012.  Among the European Union member states, UK ranks as the fourth top destination for Philippine exports,” he said.

There were a total of 218,777 permanent, temporary, and irregular Filipinos in the UK as of December 2012, according to the Commission on Filipinos Overseas.

From January to September of 2013, the UK was among the top 10 countries with the most number of tourists in the Philippines.

“Countries in Asia Pacific have, in their different ways, made remarkable progress in recent decades but on some of the paths they have taken until now, progress will get harder as the global landscape changes,” Hague said.

“Asia has astounded the world with its progress in the last three decades, and I confidently hope it will produce the new ideas, the new thinking and the new discoveries to surprise and benefit all of us for many decades to come,” he said.