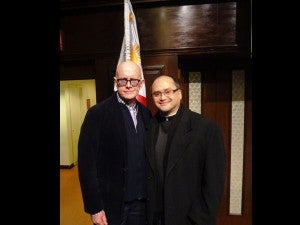 NEW YORK—In a quick turn of events, the police authorities in Queens arrested a suspect. No further information was released pending investigation.

Theater journalist Randy Gener was on his way home from an opening-night after-party on Jan. 17, between 3 a.m. and 3:30 a.m. when an unidentified man struck him on the head.

He was 100 yards away from his home on Seventh Avenue near 54th Street, where he was found. A sketch of the suspect was released based on witness account and circulated on TV news late Monday night.

Following a candlelight vigil held by friends of Fil-Am journalist Randy Gener at the Philippine Center on Fifth Avenue on Jan. 27, his family gave more details of the assault he suffered—a possible hate crime—and a status update on his slow recovery after a brain surgery health.

“We are pleased and relieved that a suspect has finally been apprehended and trust that the NYPD and District Attorney will make all efforts to bring justice for Randy,” Stephen Nisbet, Gener’s husband, and sister-in-law Jessica Blair Driessler stated. “At this time, we are focusing on Randy’s healing and moving forward together as a family.”

The family issued a statement thanking the New York Police Department, particularly the Hate Crimes Task Force, a non-profit organization NYC Anti-Violence Project and the community at large for joint efforts in raising awareness of the incident, holding a vigil and fund-raising for Gener’s medical expense.

The Franciscan friars of St. Francis of Assisi NYC condemned the attack against the gay community. “To our gay and lesbian brothers and sisters, the staff and friars assert our solidarity with you,” said Fr. Julian Jagudilla, OFM. “We strongly add our voice to the call for everyone’s right to live with dignity and freedom, especially freedom from violence of any sort.”

In a similar incident in the past, the friars stated, “To the rest of our community, we urge everyone to stand up against this violence in word and deed. Christ stood between the stone-wielding crowd and the woman caught in adultery. He even commanded that swords be put away when the soldiers came to arrest him. Jesus deplores violence and as His disciples we must do the same. Let us all stand up for our gay brothers and sisters in solidarity against any sort of violence: verbal and especially physical.”