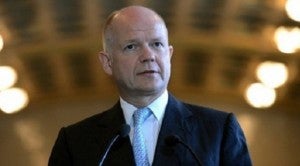 MANILA, Philippines—The Foreign Secretary of the United Kingdom (UK) is set to visit the country Thursday as part of a two-country tour in Southeast Asia and will meet with President Benigno Aquino III.

“I am delighted to be in Manila just a few days after the successful conclusion of negotiations on a comprehensive peace agreement in Mindanao, to welcome this significant step and meet some of those involved,”  UK Foreign Secretary William Hague said in a statement Tuesday.

“He will also deliver a major speech on the UK relationship with Asia, including his views on how the Asean region should evolve to meet the challenges of the Asian Century,” the UK Embassy said in an advisory.

Asean stands for the Association of Southeast Asian Nations.

“Hague is the first British Foreign Secretary and most senior member of the Cabinet to visit the Philippines since 1997,” it said.

The UK was among the first countries to respond to the devastation caused by Super Typhoon “Yolanda” (international name Haiyan) by providing much needed transportation equipment and machinery across the Visayas.

“As seen by the overwhelming international response to Typhoon Yolanda, of which the UK was proud to be a leading part, the Philippines and Filipinos have many friends. I am determined that the UK will continue to be one of them,” Hague said.