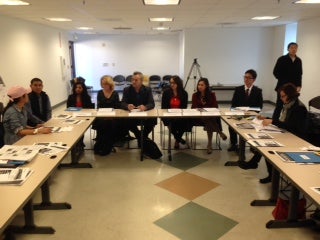 The New Americans Campaign (NAC) initiated in 2012 by a network of businesses, nonprofit organizations and grant-makers exhorted the assembled group of ethnic media representatives and community leaders to educate their audiences on the value and benefits of becoming a US citizen.

To become US citizens, applicants must have been legal residents for five years. Their children become naturalized as a consequence of their own naturalization.

The event couldn’t have come at a better time for the Filipino-American community. The request Temporary Protected Status (TPS) for the stranded relatives of Haiyan super-typhoon victims last year has caused a furor and is still unresolved.

For other immigrant groups, the urgency of proper documentation has come to the fore now that the Affordable Care Act (ACA or popularly, Obamacare) is law.

Moreover, while immigration reform is still to come, there’s time before Form N-400 for US citizenship application doubles from 10 to 20 pages.

“US citizenship is extremely important. It gives you the right to vote. It allows free travel. If you are a permanent legal resident and you go abroad for six months you could abandon your residency. You can lose your status. If you commit certain crimes you can be deported. Even though we call it permanent residency, it is definitely not permanent in that sense. And it can be revoked,” Sandoval explains.

Sandoval also observes that naturalized US citizens are much more motivated and less fearful of participating in public affairs: “They become involved in their local government and they advocate for their rights more effectively and efficiently than those who don’t feel they have a foothold in their community and in society.”

One problem in applying is the $680 fee. For immigrants on fixed incomes, this could be a month’s pay. Also, some private lawyers and unscrupulous notaries charge thousands of dollars for their services.

Siren offers free and ethical multilingual services and is promoting the use of the waiver to the application fee that many people don’t even know exists. Immigrants with low incomes and few benefits can avail of this program if they submit proof of income.

The campaign had six events last year and helped naturalize 1,552 legal immigrants while helping them save a combined $535,160. Through its network, the campaign provided free study materials for the citizenship exams.

One big barrier to US citizenship is English competency. The exam featuring interview and interrogation by USCIS officers can be extremely intimidating.

“What we’re doing is de-mystifying those interviews,” explains Sandoval. “We let people know what they entail. We’re giving them the 100 questions, the CDs for them to study. We’re providing them with free information on where they can get free citizenship services so they feel empowered and prepared for the interview.”

According Mann Lee, supervisor of Self-Help for the Elderly’s naturalization program, a Chinese client was so intimidated when deportation was mentioned and birth date was asked. “The yes and no section (in the US citizenship application exam) was also difficult for them to understand.”

However, Beatrice Ann Pangilinan, an Asian Law Alliance attorney said, the process is now being streamlined. Two years ago, it took from four to six months for naturalization. Now it only takes two to three months for the exams to happen, she notes. She was amazed at how one client still had a green card from the 1960s.

“Deportation only happens when you commit serious crimes or when you misrepresent,” Pangilinan explains. “The questions are only at the fifth-grade English level (for most Filipinos). You don’t need to be super-fluent in English. I think it’s more the fear of the unknown that still intimidate some applicants. If you fail the exams, you have two more chances to re-apply, though you have to pay the stiff fee again.”

Sandoval said, “We’re offering great services but it’s really difficult for us to let people know about it. We can have a million free events. But if people don’t know about it, they’re not going to come and be able to know and take advantage (of the benefits of citizenship).”

Silicon Valley De-bug’s Adrian Avila and Zenia (no last name) testified for the benefits of US citizenship after their harrowing experiences as undocumented aliens.