DOJ studying implications of US ruling on Dacer case–De Lima 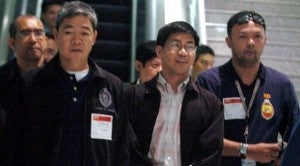 MANILA, Philippines—Justice Secretary Leila de Lima on Friday said the government was studying the implications of the civil case ruling that awarded damages to the family of slain publicist Salvador “Bubby” Dacer, particularly with regard to the double murder case against other suspects that is still pending in a Manila court.

She said she would evaluate the ruling when she receives a copy of the decision.

But De Lima hinted that the evidence presented in the US court could be used to charge the other suspects in the murder of Dacer and his driver, Emmanuel Corbito, who were either freed or not charged because of insufficiency of evidence.

“We will look into its effect on the criminal case [pending at the Manila Regional Trial Court]. I want to see the very basis of that ruling, what evidence they handled and presented in court. It’s a civil suit and the quantum of evidence is different,” she said.

De Lima recalled that Aquino was ordered released in 2012 after the Manila RTC ruled that there was no probable cause to charge him with the murders.

Dacer’s US-based daughters brought a wrongful death suit against Aquino in 2010, accusing him of authorizing and directing the killing of their father.

The $60-million damage suit included seven former Philippine officials, including deposed President Joseph Estrada and ex-senator Panfilo Lacson who headed the Presidential Anti-Organized Crime Task Force (PAOCTF) that is alleged to have carried out the abduction and murder.

The Dacers used the US Alien Tort Claims Act and Torture Victim Protection Act (TVPA), which allows US courts to hear cases of human rights abuses filed by noncitizens against officials of a foreign government for abuses committed anywhere in the world.

In his ruling, Judge William Alsup noted that “Michael Aquino has apparently escaped relatively unscathed” from the consequences of the gruesome crime.

“The cruel manner in which defendant (Michael Aquino) orchestrated the abduction, torture and killing of Salvador Dacer is chilling,” Alsup said.

The court ordered the $4.2-million TVPA relief to the Dacer daughters in a default judgment, after Aquino failed to appear in more than eight hearings.

According to the official court documents, Dacer was brutally killed, along with his driver, in November 2000, shortly after he was summoned to Malacañang where he was berated for pushing for the impeachment of Estrada.

On Nov. 24, 2000, the court found Dacer was abducted, interrogated and tortured, on the instructions of Aquino, the then PAOCTF chief of operations. His driver, Corbito, was murdered along with him and their bodies were burned in a ravine in Cavite province.

In 2001, the Philippine justice department filed double murder charges against Aquino and other PAOCTF officers, including Cezar Mancao, for the double murders.

He was arrested for the murder of Dacer and jailed at the National Bureau of Investigation but was released in 2012 after the Manila Regional Trial Court dismissed the case against him.

Mancao, who had implicated Aquino in the Dacer-Corbito murders, escaped from NBI detention last year after the court rejected his offer to become a state witness.

Aquino, who is now a security officer for the Solaire casino, told the Inquirer on Thursday that Alsup’s decision was “flawed,” in that it did not consider the Manila court’s ruling dismissing the case against him. He also said that the US court had no jurisdiction over the case.

Read Next
2014—best time to become a US citizen
EDITORS' PICK
Smart poised to turn PH into ‘Smart 5G country’ with nationwide rollout
New Vatican ambassador to PH named
We don’t want gov’t to fail, because it’s all of us who will suffer and die — Robredo
Duterte keeps Metro Manila under GCQ for entire October
Get 80% OFF Ignite 2020 Cyber Tickets starting 28 September
Water remains our saving grace right now
MOST READ
Duterte keeps Metro Manila under GCQ for entire October
Fernandez: Velasco camp ‘betrayal’ pushes call to retain Cayetano as Speaker
Mayor Treñas tells Locsin: Iloilo City is much better than what you think
Palace: Some cities in Metro Manila eligible for MGCQ
Don't miss out on the latest news and information.