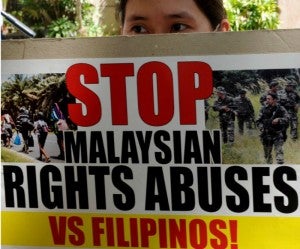 MANILA, Philippines—Malacañang on Thursday summoned Philippine Ambassador to Malaysia Eduardo Malaya over reports of alleged abuses against Filipinos in Sabah, Malaysia, following a nationwide crackdown on illegal migrants by the Malaysian authorities.

Malaya, who happened to be in Manila, met with Communications Secretary Herminio Coloma to verify allegations of police brutality against overseas Filipino workers (OFWs), including the rape of Filipino women by Malaysian jail guards in Sabah.

Coloma vowed to investigate the alleged abuses of OFWs and Filipinos, particularly in Sabah, where the majority of undocumented Filipinos live.

Sabah, one of the 13 states in the Malaysian federation, is closer to Tawi-tawi than to the Malaysian capital of Kuala Lumpur. (The Philippines has a standing claim to Sabah based on the ownership of the North Borneo territory by the Sultan of Sulu who ceded his sovereignty to the territory to the government of the Philippines in 1962.)

Malaysian immigration authorities started on Tuesday a crackdown of illegal immigrants, triggering the roundup of documented and undocumented OFWs.

Reports of Filipinos being rounded up, thrown to overcrowded processing centers and jails, and forced to admit they were illegal workers have reached Malacañang.

Some of the female migrant workers were sexually abused, according to the reports, but these have yet to be verified by the Department of Foreign Affairs (DFA).

Coloma met with Malaya shortly after the secretary presided over a noontime briefing in Malacañang, where dzRH reporter Florante Rosales called Coloma’s attention to reports of abuses in the immigration crackdown in Malaysia.

“I was among them, and I experienced the hardships experienced by jailed Filipinos here in Sabah. We were treated as if we were criminals,” said Florito who stressed that he was “fully documented … with a working visa.”

Florito, an architect who is a project manager of a Malaysian construction company in Kota Kinabalu, the Sabah capital, sought his brother’s help because of the alleged inaction of the Philippine embassy in Malaysia over the mistreatment of the Filipinos.

According to Florito, he happened to be inspecting a project in Sabah when Malaysian authorities rounded up all the workers, documented and undocumented, last Jan. 21.

He said he was slapped in both ears during the immigration “processing,” with Malaysian authorities allegedly forcing him and the others to admit that they were undocumented aliens.

He said he was among the 311 jailed foreign workers who went through a hellish time in the hands of Malaysian authorities—chained, physically abused and bullied.

Those rounded up were made to sleep on the floor of an overcrowded and pest-infested hall.

Florito said he was punched in the stomach three times after he attempted to send text messages to his family in the Philippines.