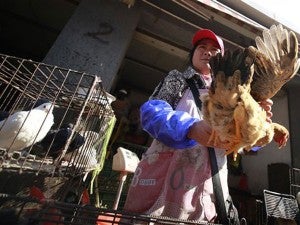 MANILA, Philippines—The Department of Agriculture said Tuesday it has banned imports of poultry and related products from China after it confirmed an outbreak of the HN52 strain of bird flu in the northern province of Hebei.

The embargo issued by Agriculture Secretary Proceso Alcala, covers all domestic and wild birds as well as eggs and even semen from poultry originating in China.

The agriculture ministry decided to enforce a ban after receiving an official report from the China Animal Disease Control Center, Veterinary Bureau in December.

The report confirmed an outbreak of the H5N2 strain of Highly Pathogenic Avian Influenza(HPAI) virus in poultry in three villages in Hebei, China, the department said.

More than one hundred thousand birds were culled in the area as a precautionary measure, local reports said.

The ban is temporary but no date has been given for it to be lifted.

In 2013, China had 144 cases, including 46 deaths, from the H7N9-strain of avian influenza, according to figures from China’s National Health and Family Planning Commission.

So far this year there have been at least six bird flu deaths in mainland China, according to media reports.