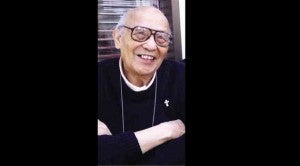 He was a humble man with a commanding presence. I can only imagine what that looked like 50-plus years ago, when he was a young university student, an aspiring journalist, a community activist, or just a mischievous boy pursuing his college sweetheart.

But we’ll save those stories for actual writers to tell.

I knew Uncle Fred for five short years of his life, when he already had been together 60 years with his wife Dorothy Laigo Cordova, had fathered eight children, at least three community organizations, and had enjoyed 20 years as founder and president of the Filipino American National Historical Society (FANHS).

Those five years served as a foundation for me, as Uncle Fred imbued them chock-full with Pinoy purpose. He watched me transform from someone who placed little to no significance on his cultural heritage into one who embraced it as the focal point of his character.

Thus he claimed me: “If you’ve got one drop of bagoong in you… then we’ve got you. You’re a Filipino.”

He of course was referring to the pungent, purple, Filipino shrimp paste that ferments in jars and complements meals. Uncle Fred kept one such jar on his work desk to hold red sharpies and pencils, with which he continued his journalistic tendencies of meticulously marking, editing, and note-taking.

A perpetual work in progress—one way I’d describe his attitude toward life. Consistently searching how to be a better person. Persistently taking on new responsibilities. Constantly adopting new projects, with his to-do list always fluctuating. Every time I visited, he’d have dreamed up another ‘plan’ to expand outreach to the community, or come across another Fil-Am celebrity. Naturally, this meant I was to enact ‘the plan’ by teaching him to navigate Gmail, or go to the basement and archive a new folder for Enrique Iglesias.

Uncle Fred, together with Auntie Dorothy, gathered many lifetimes of accomplishment within the walls of FANHS, most notably the National Pinoy Archives, a huge repository of Filipino Americans and their stories dating back decades. His self-appointed title—‘Archivist,’ not ‘President’—never rang more true than when he encountered another Filipino American soul for whom to triumphantly mark a name on a manila folder and place it (alphabetically) in one of the already numerous, over-full boxes.

The dedicated couple, through their oral histories, archives, and sum total knowledge, collectively wrote the proverbial book on Fil-Am history. But Uncle Fred didn’t stop, embarking three years ago on a task to actually write that book. His manuscript, “From Dried Mangoes to Spoiled Milk and Sweet Honey—425 Years of Filipino American History,” was never fully completed, due to its frequent revisions and additions, but the history continues in our stories.

The greatest thing Fred Cordova ever did for me was to sit me down and talk. And he did talk: about the inspirational civil rights movements of the ’60s and ’70s, about teaching at the University of Washington, about being “too damn Filipino,” the troublemaking Filipino Young Turks, God and profanity in the same breath, the Seattle Seahawks and Doug Baldwin, about his wife, and countless other topics. This was a remnant of a (slowly dying) oral tradition.

I will not pretend to be closer to him than others who’ve known him well, for his words and actions touched many. His children have said that during his lifetime they had to “share” him with the community.

He was much more than a father—also a professor, deacon, storyteller, archivist, historian, mentor and uncle. In all his walks of life, Fred Cordova reached out and inspired young leaders, and in every way reminded me to be Pinoy and proud. There is little recourse for me but to reach out and do the same. (The Filam)

Seattle resident Daniel Buenafe Griffith is the regional director for the Pacific Northwest of Kaya Collaborative. While president of the United Filipino Club at Seattle University, he was also a consistent volunteer and intern at the Filipino American National Historical Society led by founder Fred Cordova. Cordova passed away on Dec. 21 hailed by Seattle as a “giant and a pioneer” within the Filipino community.