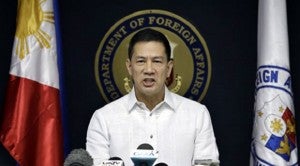 MANILA, Philippines – The Philippines will not recognize the fisheries law implemented by China in the waters off Hainan province, the Department of Foreign Affairs (DFA) said Tuesday.

“We don’t recognize it, that’s why we are protesting about its declaration and implementation,” DFA spokesman Raul Hernandez said when asked for a categorical response by media regarding Hainan’s new law.

“This law being a Hainan law covers not only their maritime zone but also the maritime zones of other coastal states including the Philippines particularly our 200 nautical mile Exclusive Economic Zone (EEZ),” Hernandez said.

China claims the entirety of the South China Sea (West Philippine Sea) as its territory including parts of the Philippines EEZ.

DFA has previously asked China to clarify its new law saying that it overlaps with the Philippines EEZ.

“The Chinese side has responded to our request for clarification by saying that the new regulation is an implementation of China’s fisheries law and covers the jurisdiction of Hainan province,” Hernandez said.

“The DFA reiterates its strong protest which we have made on 28 June 2012, since the jurisdiction of Hainan province included the Philippine territories and impinges on the Philippines EEZ,” he said.

Previously, the DFA said that China’s new law violates the United Nations Convention on the Law of the Seas (UNCLOS) and international law.

“We believe this will only heighten tension in the area and also threaten the peace and stability of the region,” Hernandez said.

“The Philippines calls on China to conform to international law particularly UNCLOS,” he said.

The DFA considers its statement as a protest and is studying the filling of a protest note against China.

“Filipino fishermen have their rights under Philippine laws and under UNCLOS to fish in our EEZ, and China has a duty under international law to respect the legitimate rights of our fishermen there,” Hernandez said.