OFWs join ‘Walk 4 Freedom’ in US 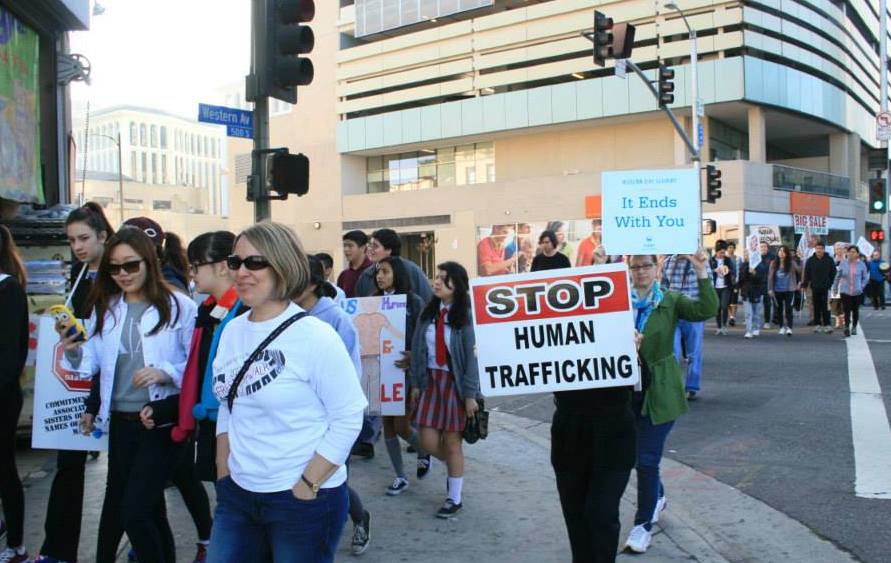 LOS ANGELES—Former caregiver Angela Guanzon, 36, recalled her two-year nightmare at a home for the elderly in Long Beach, California, where she worked in slave-like conditions.

“I worked 18 hours a day, with very little pay, and slept on the floor,” said Guanzon, one of the Filipino victims of labor trafficking who joined the 3.2-kilometer “Walk 4 Freedom” in Los Angeles on Saturday.

“I was threatened when I complained and when I tried to escape,” she said.

Holding a placard that said, “Human Trafficking: Don’t Let It Happen to You,” Guanzon urged other victims to come out of the shadows and get help.

“Many of the victims, especially my fellow Filipinos, are ashamed or afraid to come out and tell their story,” said the Bacolod native, who was rescued by the FBI in 2008.

She is now a survivor-organizer for the Coalition to Abolish Slavery and Trafficking (CAST), a nonprofit organization that provided her with shelter and legal assistance.

Guanzon was one of about 40 Filipino “modern-day slaves” helped by CAST in the Greater Los Angeles Area alone.

Most of them were victims of unscrupulous labor recruiters “who prey on those who seek a better life in the US,” CAST executive director Kay Buck told the Inquirer.

“Not only do they end up being enslaved but also in debt bondage,” Buck said.

“This human rights violation often happens behind closed doors, hidden from the public. Traffickers often exert control over victims by tearing down their self-esteem, saying that nobody cares about them,” she said.

“We are walking today to send this message: The people of Los Angeles do care. There is hope. Trafficking victims can come forward, receive help and live with dignity again,” she said.

Buck also warned Filipinos to “be cautious” when dealing with recruiters. 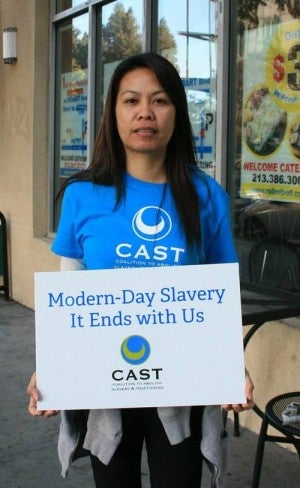 The United Nations estimates that 27 million people are living in slavery around the world today, with Los Angeles being a top destination for human trafficking in the United States.

Tens of thousands of people in the United States are living in some type of modern-day slavery, according to CAST.

Guanzon and other CAST supporters joined more than 100 human rights advocates, including Catholic nuns, in the “Walk 4 Freedom” that began and ended in front of St. Basil’s Church, near the Philippine consulate in Los Angeles.

“The United States is shining a spotlight on the dark corners where it persists, placing sanctions on some of the worst abusers, giving countries incentives to meet their responsibilities, and partnering with groups that help trafficking victims escape from their abusers’ grip,” Obama said in his proclamation.

This will help prevent the “bait-and-switch into slave labor or sexual slavery” once the workers enter the United States, he said.

The legislation would also increase penalties and enforcement mechanisms to combat trafficking.

In September last year, the Obama administration moved to extend minimum wage and overtime protections to caregivers to end their slave-like working conditions.

Advocates for low-wage workers had pushed for the change, asserting that home-care workers, who care for elderly and disabled Americans, were wrongly classified into the same “companionship services” category as babysitters—a group that is exempt from minimum wage and overtime coverage.

Under the new rule, home-care aides, unlike babysitters, would be covered under the Fair Labor Standards Act, the US main wage and hour law.

But the Obama administration is delaying enforcement of the new regulation until Jan. 1, 2015, even though regulations often take effect 60 days after being issued.

The administration explained that the delay until 2015 is to give families that use caregivers, as well as Medicaid programs, time to prepare.

In the United States, caregivers usually earn $8.50 to $12 an hour, according to industry officials. The federal minimum wage is $7.25 an hour.

Under the new rule, any caregiver hired through home-care companies or other third-party agencies cannot be exempt from minimum wage and overtime coverage.

The exemptions for caregivers who mainly provide “companionship services”—defined as fellowship and protection for an elderly person or person with an illness, injury or disability who requires assistance—are limited to the individual, family or household using the services.

If the caregiver or companion provides “care” that exceeds 20 percent of the total hours she works each week, then the worker is to receive minimum wage and overtime protections.

Live-in domestic service workers who reside in the employer’s home and are employed by an individual, family or household are exempt from overtime pay, although they must be paid at least the federal minimum wage for all hours worked.

Filipinos also work as companionship aides and live-in domestics in the United States, but there are no records of their numbers and deployment.

But they, too, will benefit from the new rule starting next year, though those of them who are modern-day slaves must come out to end their oppressive conditions.—With Inquirer Research