Zambo contractor won bidding despite having no permit 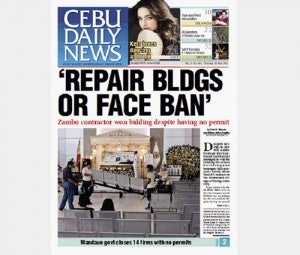 Despite having no permit, a Zamboanga del Sur-based contractor managed to win the bidding for school building and barangay hall projects worth more than P5 million in the hinterland village of Toong, Cebu City.

Papers obtained by Cebu Daily News showed that the company named MSDLR won the bidding for the two projects despite having no permit from the Philippine Contractors Accreditation Board (PCAB), a requirement for bidding.

MSDLR was disqualified in a recent bidding for the Carbon market roofing worth P5.1 million because they had no PCAB permit.

The list also didn’t indicate that MSDLR applied for renewal in 2006 and 2007, the years when the two projects were bidded out.

Cebu City Councilor Roberto Cabarrubias said he will raise this point when he meets with MSDLR representatives on Wednesday next week.

’What happened to them?’

Cabarrubias said the city engineering department ought to inspect the Program Of Work and Estimates (POWE) of the projects before implementation.

School officials described the P4.7 million, two-story Integrated Elementary School building in Barangay Toong as being substandard, with tilting floors that wobble with a single jump.

The third floor of the Toong barangay hall is also unstable, dropping five inches lower from its original level.

He said principal Florine Navarro said the parents of schoolchildren complained about the three-story Buhisan Elementary School building which sustained cracks on their walls and a tilting second floor.

It had yet to be verified whether the building is also done by MSDLR.

“The question is why didn’t the inspection teams from the city’s engineering department see the structural defects? What happened to them?,” Cabarrubias said in Cebuano.

Cabarrubias said he called the inspection team of City Hall’s Department of Engineering and Public Works (DEPW) and was told that maybe the defects came out after their inspections.

CDN contacted City Engr. Kenneth Enriquez who declined to be interviewed, saying he was too busy.

“They (the DEPW) should be transparent,” Councilor Cabbarubias told Cebu Daily News.

The councilor suspected that the contractor mixed a lot of water in the cement mixture to save on cement.

A DEPW report last year admitted there were irregularities in the construction of the barangay hall in Toong.

“The concrete slab bends or sags. On the top of the third floor, vibration is observed…it lacks re-bars. The concrete mixture is suspected to be deficient,” the report read. The DEPW also noticed cracks along on the floor.

The DEPW recommended corrective measures on two columns by wrapping holes with re-bars.

They also called for the replacement and reinforcement of the floor slab at the third floor and the removal of a perimeter for dead trees, replacing them with good earth fill materials.

“They should replace the third floor entirely,” he said.

Bacalso and two councilors went to Cabbarubias’s office to air their complaint.

They will join next Wednesday’s meeting which will also be joined by representatives of the Commission On Audit (COA).

Cabarrubias said results of the meeting will determine whether or not they will blacklist MSDLR.

Young said this was already the second time that “defects” on the P4.7 million school building was recorded.

“At first they didn’t place metal bars on the ground floor…now this. They will have to correct these defects otherwise we will ban them,” he said.

Pending completion of the repairs, the Toong school building will not be used when classes open next month, Young said.

He said the students will have to attend classes in makeshift classrooms to ensure their safety.

Young said the cracks on the building’s walls is only a minimal concern since he is worried more about the unstable second floor.

The school building was built during the tenure of former city mayor and now Rep. Tomas Osmeña of Cebu City’s south district.

The worst so far

Young, who served as education consultant during Osmeña’s tenure, said minor defects such as loose railings and a weak foundation were found in the school building in barangay Buhisan.

Another school building project in barangay Sirao had cracks.

Young said the contractor found it difficult to transport water for cement mixing in Sirao, a mountain barangay located 200 to 300 meters from the main road.

“As much as possible, we require them (contractors) to use pre-mixed cement but in the mountain they manually prepare cement because it was difficult to bring pre-mixed cement into the construction site,” he said.

Young said he was also confident that cracks on the wall does not affect the integrity of the Sirao school building because it was built by Gold Fin, which is among the city’s trusted contractors.

He said the defects found on the Toong school building were the “worst” he has seen so far.

Young said pre-fabricated materials were used for the Toong building and it is possible that its finishing would crack with the loose soil movement in the area.

Still, Young said MSDLR would have to repair the building.

He said he already sent three letters to the company, ordering them to make the repairs. The latest letter was sent two weeks ago, Young said.

Instead of complaining, Young said Toong school principal Edwin Villamor should have called the DEPW to address the defects in their school building.

Young said he would also order the DEPW to do follow ups on the contractor.

“We knew of that (building defects) and we’ve been working with the contractor to correct that,” he said.

Young said the contractor would have to work on the new defects found on the school building.

While they need to monitor unscrupulous contractors, Young said the city government lacks engineering personnel and vehicles to constantly monitor the projects implemented in the city’s mountain barangays.

“Since kulang ta ug tawo (we lack personnel), we rely on the principals and barangay officials to monitor project implementation,” the vice mayor said.