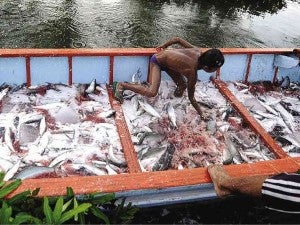 “We the leaders and representatives of Pambansang Lakas ng Kilusang Mamamalakaya ng Pilipinas (Pamalakaya), a national federation of small fisherfolk in the Philippines, submit this humble appeal to the Chinese government to recall the new fishing rule that demands foreign fishing vessels to enter in the disputed West Philippine Sea (South China Sea),” the letter, signed by Pamalakaya vice chairperson Salvador France, said.

Pamalakaya asked the envoy to relay their message and push for a diplomatic and peaceful resolution on the continuing conflict between the Philippines and China, as well as other claimant countries.

“Madam Ambassador, we ask the Chinese government to be extra prudent in dealing with the West Philippine Sea conflict. It would be better if Beijing seeks bilateral and inter-nation dialogues with other claimants rather than engage in hardcore assertion of something that needs to be carefully studied,” France said.

He said all the claimants should instead unite “to frustrate the intervention of the United States – the biggest threat to world peace according to international view.”

China, through the Hainan Provincial People’s Congress, recently issued a new fisheries law requiring foreign fishing vessels to obtain approval from its regional authorities before fishing or surveying a large portion of the South China Sea.

The Department of Foreign Affairs already asked China to “clarify” the issue.

The agency said the law will not only complicate the situation and cause an escalation of tensions but is also in violation of international law.

“This new law reinforces China’s expansive claim under the 9-dash line. It is a gross violation of international law, particularly UNCLOS, and is contrary to the spirit of the Declaration on the Conduct of Parties in the South China Sea,” the agency said in a statement.

“These regulations seriously violate the freedom of navigation and the right to fish of all states in the high seas, as provided for under UNCLOS. Under customary international law, no state can subject the high seas to its sovereignty,” it added.