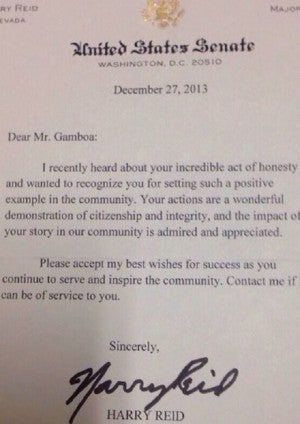 LAS VEGAS – Accolades continue to pour in for Gerardo Gamboa, the Filipino-American cab driver who found and returned $300,000 in cash left behind by a passenger in his taxi.

The latest praises came from Nevada Gov. Brian Sandoval and Sen. Harry Reid, the U.S. Majority leader, who both hailed the Filipino-American for his honesty and as example to the community.

Sandoval praised Gamboa in a personal letter to the taxi driver, saying his honesty should be emulated.

Reid, who is particularly close to the burgeoning Filipino-American in Nevada, said in returning the money, which he could easily keep for himself, Gamboa showed a “positive example in the community.”

“Your action was a wonderful demonstration of citizenship and integrity, and the impact of your story in our community is admired and appreciated,” Sen. Reid said in a Dec. 27 letter to Gamboa.

Gamboa became an Internet sensation when his story went public on Dec. 25, and was readily picked up by the international press, particularly in the Phlippines.

The 54-year old Gamboa, a 13-year cab driver in Las Vegas, chose to return the $300,000 cash left behind by a professional poker player, who had asked to remain anonymous, even though he provided Gamboa a $10,000 reward.

Gamboa, who is from Mabalacat, Pampanga and Silay City, said the money was tempting, for a split second, “but returning it was the right thing to do.”

In addition to the $10,000 reward, Gamboa received $1,000 and a steak dinner for two from his cab company, Yellow Checker Star.

“I’m happy that we can show to the world the Filipino is a good person, and can not be easily dazzled by money,” Gamboa said.

Virus similar to pathogen behind COVID-19 found in Malaysian pangolins