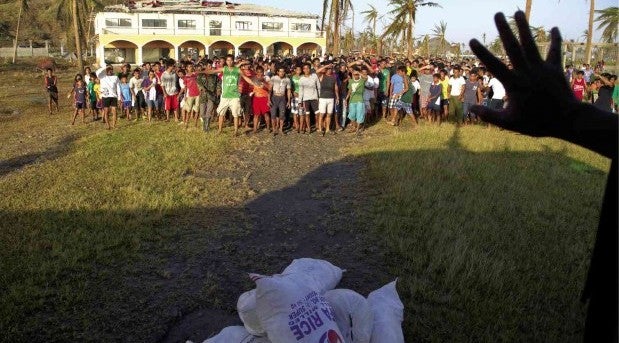 TANAUAN, LEYTE Supertyphoon “Yolanda” survivors in this town wait for the distribution of food items from a helicopter in this photo taken two days after Yolanda struck. INQUIRER FILE PHOTO/JOHN CHUA

“Since ‘Yolanda’ (international name Haiyan) struck on 8 November, the ILO supported the Department of Labor and Employment in creating over 20,000 jobs under the emergency employment program,” said Lawrence Jeff Johnson, Director of the ILO Country Office in the Philippines.

Johnson said that his organization has reached out to 100,000 people during the initial phase of the rebuilding efforts in 2013.

Aside from guaranteed social security and health insurance, the ILO has equipped its workers with masks, hats, gloves, boots and long sleeved shirts to minimize the risk of disease and injury.

Of the estimated 5.9 million jobs lost or suspended due to “Yolanda,” the ILO estimated that 2.6 million were in vulnerable employment and living near the poverty line even before the typhoon.

Workers in vulnerable forms of employment, mostly drivers and operators in Tacloban, called for the prioritization of decent jobs after Supertyphoon “Yolanda” nearly took out the sense of normalcy in the area.

“Many of our fellow drivers lost their livelihoods. Prior to the onslaught of Yolanda, they were already living in poverty. Wage alone is not enough to help workers cope,” said Judy Torres, a transport group leader in Tacloban.

Torres’ group called for decent work, which they believed is a guarantee for growth, long-term security and dignity.

Of all the workers affected by “Yolanda,” three million were from the service industry, which included people working in shops, public markets, restaurants, transport and schools.

Another 1.9 million are from the agriculture sector and one million from the industry sector.

Another benefit of the program is to keep the workers in their localities instead of migrating to other places in the country or even abroad where jobs would not meet decent work criteria.

“It’s about getting livelihoods to people who have lost everything and doing it the right way to ensure inclusive growth,” Johnson said.

Johnson added that their programs are part of President Benigno Aquino III’s vision in his inaugural speech where migration is “an option and not a necessity.”

“We support the government for people to find jobs at home so that they will not be forced to leave their families behind or to accept whatever work is available just to survive.”