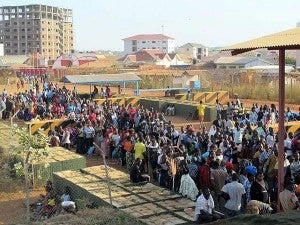 MANILA, Philippines – There are still 52 overseas Filipino workers (OFW) in strife-torn South Sudan as the government declared a state of emergency due to the continuing violence.

“Our Embassy continues to monitor the security situation in South Sudan and alert level 3 is still in effect over that country,” Department of Foreign Affairs (DFA) spokesman Raul Hernandez said in a text message Thursday.

“So far, our Embassy has confirmed that there are still 48 OFWs in [the capital city] Juba and four others are in a town called Paloch, an hour and a half away by plane from Juba,” he said.

A state of emergency was declared by South Sudan president Salva Kiir in two of its states on Wednesday as more than 1,000 people have been killed from the violence between rebel forces and government security forces.

The DFA placed the country under crisis alert level 3 last December 23 banning deployment of OFWs going there and urging Filipinos already there to undergo voluntary repatriation.

Hernandez said that 30 OFWs have already been repatriated while “57 were evacuated to neighboring countries and Dubai.”

The United Nations has already sent reinforcements for its peacekeeping force in the country and continued to appeal for more.

DFA has sent a Rapid Response Team (RRT) to South Sudan last December 23 to assist the Filipinos still stuck in the country.

“Our RRT met with a number of Filipinos in Juba and their employers last Dec. 30. The RRT designated three area coordinators for Juba to assist in the implementation of our Embassy’s contingency plan,” Hernandez said.