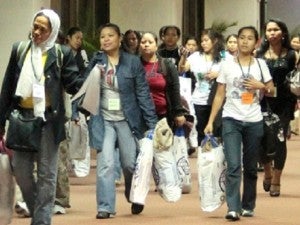 “We are pleased to report that last December 18, the United Nations (UN) General Assembly has adopted, by consensus, the Philippine sponsored Resolution no. 68/137 on violence against women migrant workers,” presidential communications operations office secretary Sonny Coloma said in a press conference Thursday.

“The resolution calls on all countries to grant women migrant workers in domestic service access to gender-sensitive, transparent mechanisms for bringing complaints against employers including termination of their contract in case of labor and economic exploitation, sexual harassment and sexual abuse and violence,” he said.

According to records from the Philippine Overseas Employment Administration (POEA), 94,880 female domestic workers were deployed overseas in 2010.

The resolution adopted by the UN was sponsored by the Philippines because it saw the need to protect the thousands of Filipina migrant workers worldwide, Coloma said.

“It urges all governments to consider permitting women migrant workers who are victims of violence to apply for residency permits independently of abusive employers or spouses, in accordance with national laws, and to eliminate abusive sponsorship systems,” he said.

“The Philippines’ initiative was prompted by the need to extend protection to thousands of Filipina migrant workers,” Coloma said.